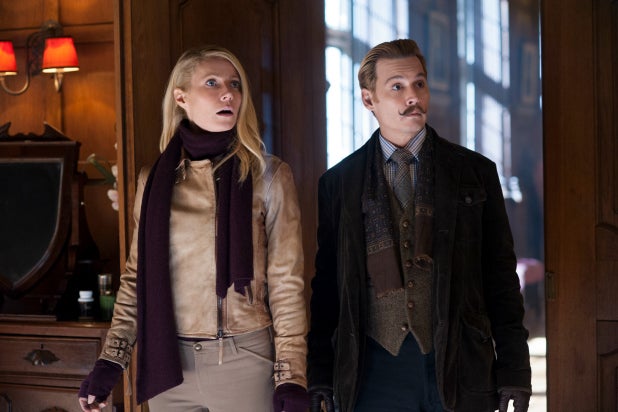 I admit to being a big fan of watching glamorous movie stars gadding around world capitols in the comedic pursuit of art treasures; I spent countless hours glued to the TV as a kid soaking in comic soufflés like “Charade” and “How to Steal a Million,” and I’ll even defend the much-maligned “Hudson Hawk” for its efforts to keep the genre alive in our modern, cynical era.

If only I could feel as charitable toward “Mortdecai,” a glamorous, jet-set fantasy about crooked art dealers and stolid cops dashing about the globe on the hunt for a legendary lost Goya painting. While watching this new caper, I was reminded why movies like this are called soufflés in the first place: if they don’t stay perfectly aloft, they collapse.

Screenwriter Eric Aronson (“On the Line”), adapting a novel by Kyril Bonfiglioli, and director David Koepp (“Premium Rush”) obviously love this genre as well, and it’s easy to sense that the cast had a great time sporting chic duds and racking up frequent-flyer miles while exchanging banter and engaging in the occasional car chase. All these ingredients never quite come together, though, leaving “Mortdecai” a glossy misfire.

Johnny Depp stars as Lord Charlie Mortdecai, an unscrupulous art collector who usually escapes his shady deals only with the support of his manservant Jock (Paul Bettany, clearly relishing a rare chance to play comedy). Up to his new Franz Josef mustache in debt — and estranged from his beautiful wife Johanna (Gwyneth Paltrow), who gags every time she comes near that swoopy bit of facial hair — Mortdecai must accept an assignment from Inspector Martland (Ewan McGregor) to track down the Goya.

Complicating matters are terrorist Strago (Jonny Pasvolsky), who wants the painting for himself, as does American billionaire Krampf (Jeff Goldblum). And while Krampf’s randy daughter Georgina (an underutilized Olivia Munn) puts the make on Mortdecai, Martland continues to moon after Johanna, whom he still loves even though Mortdecai won her heart when the three were at Oxford.

There’s a very delicate skill involved in this sort of raised-eyebrow, international-intrigue comedy, and while Aronson and Koepp sometimes get it and sometimes don’t, the casting of Depp certainly doesn’t help. Sporting gap teeth and plummy what-ho accent, the actor takes another opportunity to busy himself with props and silly voices rather than bothering to give a performance. On the heels of “The Lone Ranger” and “Dark Shadows,” it appears that Depp has turned himself into Mike Myers — not the “Austin Powers” Myers, the “Love Guru” Myers.

Granted, anyone would have difficulty making lines like “Every man needs a Jock” land, but Depp’s performance is so fussy and commenting-upon-itself that it just makes matters even worse.

Paltrow, to her credit, knows exactly what movie she’s in, drinking in every witty riposte, outsmarting everyone around her and knowing how to make just standing there into a punchline. Cinematographer Florian Hoffmeister (“The Deep Blue Sea”) makes Paltrow look creamy and delicious in every shot, and she in return gives the movie its solidly second-best performance, behind only the deadly and droll Bettany.

“Mortdecai” is by no means a disaster — the occasional joke lands, and there’s at least some fun to be found in the frenetic farce of all the conspiracies and the running-around (It’s certainly not the fiasco that the recent, barely-released remake of “Gambit” was). Still, I spent most of the movie waiting for it to find its rhythms and set a witty pace for itself that would allow the humor to build and the outrageous situations to pay off grandly.

Could we get a do-over with, say, Steven Soderbergh in the director’s chair and an actual British comedian in the title role? (And while we’re making wishes, could Johnny Depp go make a movie for Lars Von Trier or Nicole Holofcener or someone else who will strip him of the disguises and the dialects?) There’s nothing wrong with a little trifle so long as you know how to make it palatable.