Everybody has a story to tell. That’s the premise of both “The Moth Radio Hour,” debuting at 11 a.m. Sunday on KCRW, and the live storytelling events that spawned it.

“Moth Radio Hour” will air in the slot normally filled on KCRW by “This American Life” for five weeks, which is in repeats. The choice seems appropriate, as the Moth itself was described by the New York Times as “a farm league for ‘This American Life.’” 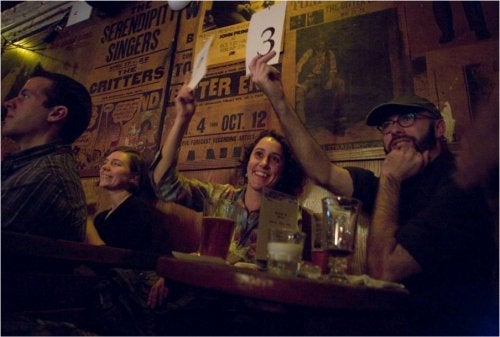 Jennifer Ferro picked up the show as one of her first decisions asthe station’s recently named general manager.

She told TheWrap: “KCRW’s goal is to be the sound of what’s happening now in Los Angeles and to be a center for artistry and creativity … Our role in the community is as this great social network — the original social network — connecting the areas of Los Angeles that are generally separated by oceans of traffic."

She feels the Moth fits that bill. "It’s live storytelling by regular people.”

Indeed, storytellers in the upcoming series range from the famous – novelist Richard Price, rapper Darryl “DMC” McDaniels – to Wanda Bullard, on whose South Carolina porch the gathering of people simply telling stories got its start. Founded by George Dawes Green in 1997 as a New York-based nonprofit, it now has offshoots in Chicago, Los Angeles and Detroit.

Topics on the first two “Moth Radio Hour” shows range from a Senegalese depression cure that gives new meaning to the phrase “It takes a village” to a geneticist discovering his own unusual genetic makeup to a man contemplating the “alternate universe” version of himself.

Happy stories, funny stories, sad stories – there is no specific “Moth story,” says the group’s artistic director, Catherine Burns. “We look for stories that represent big moments in people’s lives,” she told TheWrap. “The best stories usually involve some sort of change. … Sometimes little things lead us to big realizations, and those moments make great stories. It helps elevate them from being something anecdotal.”

Independent producer Jay Allison (“This I Believe”), co-founder of the Public Radio Exchange, has been working with the Moth on the radio show. KCRW actually is airing the second batch of five hourlong shows; there were five done previously and, Allison said, “maybe 15 more by next year.”

As of late April, he said, more than 150 public radio stations had signed on for the show; he said he expects that number to pass 200, as it did for the first batch.

Burns said, “’The Moth Radio Hour’ is the realization of a 10-year-long dream to bring the Moth to public radio. The mission of the Moth is to connect people through their stories, and we have long felt that radio was the perfect medium for our stories to reach a wider audience."

Additionally, she said, “We hope that the show will let us not only reach more listeners, but uncover new storytelling voices from across the country.”

Anyone with a story to tell is invited to pitch their story on the Moth website. Allison explained, “Some of these people are just regular people, they don’t have ambitions to be performers. They just happen to be great storytellers and enjoy doing it. … Anybody who fancies themselves that way, or whose uncle is that way, we hope they’re going to call.

"We have a pitch line on our website now, so anybody can call in and leave a two-minute message by phone or on the web and just kind of tell us about their story. Then we’re going to have a competition and bring the best ones of those to New York and have a slam with them,” Allison said.

Stories are recorded live by the Moth’s engineers but they are not, despite how they sound, entirely spontaneous. “Even though they seem completely natural and off-the-cuff, they have been rehearsed a little bit with the Moth team,” he explained.

Burns added: “Once the story structure is in place, we try to get the storyteller ready to tell it on stage. Sometimes this involves working on pacing, voice levels and other technical things. But if it’s a very personal story – and many of the great Moth stories are very personal – then part of our job is to help them get in the headspace to share their story with the audience.

“It takes a great deal of courage to tell a very personal story in front of a live audience,” she said, “especially if you are really connecting with the audience and not just reciting the story from memory. We often say that the storytellers are on stage without a safety net.”

The stories are not necessarily short, either – each hourlong program comprises three or four tales.

“Everything’s now at such a pace that some of the humanity and the breath is bleached out of it,” Allison said. “And the Moth, some of these stories go 15 minutes, one person just talking, no music, no production, that’s utterly unusual in media … And yet our evidence says people are happy to sit and listen to it. I think it might be partly because some part of our human brain is just sick of the pace at which we’re forced to digest, because everybody thinks that’s what we want.”

The KCRW schedule for “The Moth Radio Hour” follows, with all programs airing 11 a.m.-noon:

Sunday, May 16
Paul Nurse – "Discussing Family Trees in School Can Be Dangerous" – A geneticist discovers his true identity
Ellie Lee – "A Kind of Wisdom" – A Chinatown fire brings a family and community together
Steve Osborne – "The Stakeout" – A NYC cop mistakes a dentist for a bank robber
Hosted by the Moth’s artistic director, Catherine Burns

Sunday, May 23
Andy Christie – "It’s Not the Fall That Gets You" – Midlife parachute jump
Daniel Choi – "Don’t Tell, Martha!" – War veteran decides to honor the Honor Code and comes out
Vikki Kelleher – "Tell Him It’s OK to Go" – Woman at her father’s deathbed
Tom Ziegler – "Fireman’s Remorse" – With no engine backup, a fireman is unable to save two kids
Brian Finkelstein – "How I Earned My Bitter Badge" – Falling in love with an engaged woman
Hosted by the Moth’s senior producer, Jenifer Hixson.