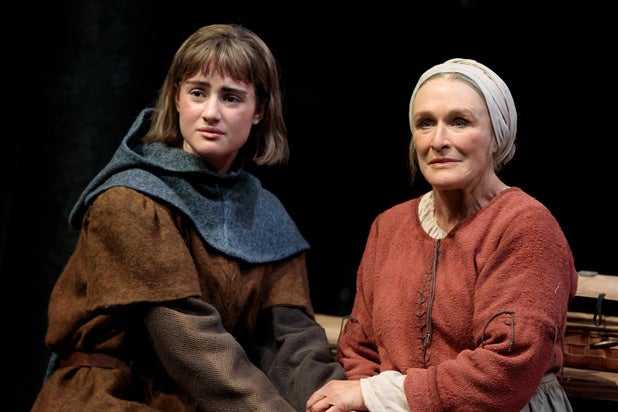 In unexpected ways, Joan of Arc’s mother has much in common with Norma Desmond. Channeling that same naked determination and single-minded doggedness that she brought to a burnt-out movie star in “Sunset Boulevard,” Glenn Close plays Isabelle of Arc in the world premiere of Jane Anderson’s “Mother of the Maid,” which opened Wednesday at the Public Theater. The chasmic difference between the two portrayals is how all that Close attention is now being directed outward, at a beloved daughter, rather than lavished on one’s self.

Close as Norma was one of those Tony-winning performances that defined the words “tour de force,” and for some of the wrong reasons. It was big without being deep, as if all that overacting could cover up flaws in the material. Close was going to deliver a show despite the second-rate material.

Anderson’s play, on the other hand, is not a showcase for one performer, even though Close is every bit as grand here as she was in “Sunset Boulevard.” In “Mother of the Maid,” she gets to share the stage with the equally vivid Grace Van Patten, and Close gains in stature because of the friendly competition.

The two actors could hardly be more different in their respective approaches. Where Close is classic and very studied, Van Patten is modern, bringing a beguilingly flat American accent to her dialogue that sounds like she just made it up on the spot.

To hear this young actor whine the word “Ma” is to learn how contemporary a country girl this Joan really is. There’s also very wicked fun in how she describes her many visions from St. Catherine — and the reaction of powerful people to the news. “[The captain] knows I’m the real thing. He said I had the glow!” she boasts.

Playing Joan’s soldier brother, Andrew Hovelson conveys that same pithy irreverence. Also great is Daniel Pearce’s profane priest and, later in the play, his scribe, an employee of the royal court who’s just doing his job regardless of the impending auto-da-fé outside.

Much less focused is Matthew Penn’s direction of Joan’s recalcitrant father (Dermot Crowley) and a lady of the court (Kate Jennings Grant) who lavishes praise on Isabelle without every really understanding her. Crowley and Grant’s scenes with Close lack the anarchic humor that comes from her rubbing up against Van Patten and Hovelson and their far less respectful handling of the material.

“Mother of the Maid,” of course, is about being a parent, and the beauty of Anderson’s words as spoken by Close is how this mother’s unreserved love is continually being bombarded by baser feelings of envy, competition and, finally, privilege when Joan becomes the court’s biggest celebrity for a day or two.

Anderson, Close and Penn let these other less admirable emotions bounce around without every letting any of them explode. Isabelle remains resolute in her love and even goes so far as to tell her soon-to-be-martyred daughter a lie about the suddenly absent St. Catherine. It’s blasphemous, what Isabelle tells Joan, but sometimes there are things bigger than God and eternity.

For over two hours on stage, Close and Van Patten perform in entirely different universes, and do so brilliantly, but their final scene together finds them completely on the same page, bonded, and bathed in each other’s love.