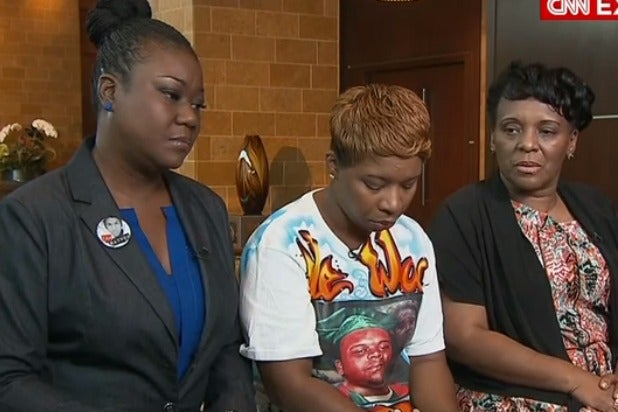 The mothers of Sean Bell and Trayvon Martin met for the first time with Michael Brown’s mother for a CNN interview Monday in which they talked about coping with the loss of their sons.

All three women lost their sons, unarmed young black men, in shootings. The interview aired on the same day Lesley McSpadden, Brown’s mother, is expected to bury her son. The 18-year-old’s killing by a Ferguson, Mo., police officer has set off two weeks of protests in the town.

“Keep the memories in your heart. That’s going to help you to continue to carry on with your son,” said Valerie Bell, whose son, Sean, was killed by police in 2006 just before he was to have gotten married. The officers were acquitted.

“It’s okay to cry, scream. I still do with eight years,” said Valerie Bell, who urged McSpadden to have faith in God and rely on her family.

Also read: Michael Brown Shooting Witness: ‘I Knew This Was Not Right’ (Video)

“And put a picture up, when he was happy,” Fulton said. “Don’t just focus on the death. Because that’s going to eat away at you.”

Fulton said Michael Brown, like Sean Bell and Trayvon Martin, would be the victim of character assassination.

“People that don’t even know her son are gonna say nagetove things about him… just to try to justify what happened,” she said.

Martin and Bell’s mothers both said they still speak to their sons. Bell said she remembered her son always telling her, “Ma, I got this.” She shared those words with McFadden, telling her she could get through the ordeal.

“They’re offering me something right now and I can’t tell you what it is, but it’s something,” she told CNN’s Don Lemon. “And something is more than nothing.”