The Academy of Motion Picture Arts and Sciences has promoted Shawn Finnie to executive vice president, member relations and awards. The news was announced Friday by Academy COO Christine Simmons.

Finnie will report directly to Simmons, leading engagement and outreach initiatives for the organization’s membership. He will lead a team of more than 20 staff members and work with the Academy’s Office of Representation, Inclusion and Equity and the Branch Executive Committees on member representation and inclusion efforts.

“Shawn is a unique and innovative leader. He brings to this position the collaborative, solution-oriented and engaging style that has driven results throughout his time at the Academy,” Simmons said. “His efforts to foster greater representation and connectivity among the global membership, expand how we serve our members and strengthen relationships within the greater film community have been and will continue to be invaluable to the organization and the industry as a whole.” 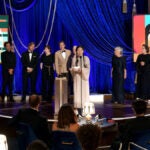 Finnie has worked at the Academy for the past eight years, and most recently held the position of senior director, member relations and awards. In that role, he was responsible for member outreach and engagement, and amplifying the organization’s initiatives in representation and inclusion.

He also played a key role in events like the Governors Awards and the Academy Women’s Luncheon. Last summer, as part of the Academy Aperture 2025 initiative, he helped launch “Academy Dialogues: It Starts with Us,” a series focused on race, ethnicity, history, opportunity and the art of filmmaking.