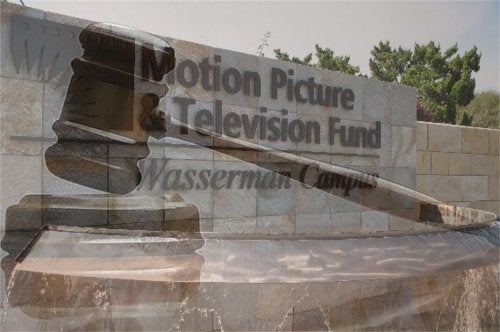 Declaring that the Motion Picture Home’s most vulnerable members are in need of critical supplies such as wheelchairs and medicine, the wife-husband acting team of Renee Taylor and Joseph Bologna will host a celebrity-powered auction Saturday at their Beverly Hills home.

Bologna will act as auctioneer, selling off a grab-bag of donations made by sympathetic celebrities.

In addition, there will be at least one Andy Warhol lithograph, along with a Robert Rauschenberg print, a Carol Burnett-donated Bob Mackie dress and items from both “The Partridge Family” and “Oklahoma!” donated by Shirley Jones.

Since the Motion Picture and Television Fund, which operates the entertainment industry retirement home in Woodland Hills, announced one year ago that it would have to close its Wasserman Campus’ Long-Term Care Unit and adjacent acute-care hospital, the LTCU’s population has slipped from just under 140 residents to its present 60.

With the pending closure, the MPTF no longer accepts donations earmarked for the LTCU. “The money doesn’t get to them when we give it to the Motion Picture Home,” Taylor told TheWrap.

The MPTF has cited spiraling costs and the recession as factors forcing it to shutter the LTCU – a claim hotly disputed by activists seeking to keep the facility open.

“It was never supposed to make money,” Taylor said of the nonprofit facility. “It was a place where you would go at the end of your life to be cared for.”

Responding to claims that LTCU residents are hurting for supplies and that nursing and therapy services are being cut back, MPTF COO and vice president Seth Ellis dismissed the allegations as “unbelievable.”

“There has not been any — any – diminution in services,” Ellis told TheWrap. “There is the same ratio of personnel to residents, the meals are the same and medicines are still administered as the doctors prescribed.”