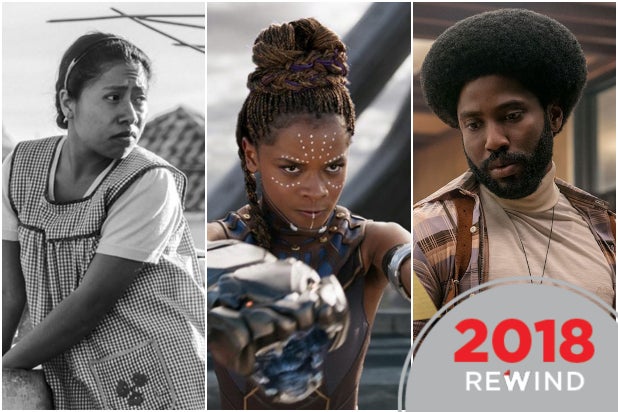 Films like “Black Panther,” “Roma,” “A Star is Born” and “A Quiet Place” didn’t just shape the cultural conversation in 2018; they changed the industry.

From racial diversity to a historic year at the box office and to blockbusters that have found their way into the awards season buzz, the movies still mattered this year in ways that stand to have an impact on the choices Hollywood makes moving into 2019 and beyond.

Here are seven trends in the film industry that stood out in 2018:

1. Disney dominated at the box office — and it’s only getting bigger

However you want to slice it, the Mouse House dominated this year. Disney released the top three films of the year in “Black Panther,” “Avengers: Infinity War” and “Incredibles 2,” which buoyed the Burbank-based studio to $7 billion at the worldwide box office this year, including $3 billion-plus domestically.

Disney is making so much money it could afford to take losses on misfires like “Solo: A Star Wars Story,” “A Wrinkle in Time” and “The Nutcracker and the Four Realms” — and the first two even managed to crossed the $100 million mark domestically.

The big question though is how much its dominance might grow with the about-to-close $71.3 billion acquisition of key 21st Century Fox film and TV assets. That move is rattling the industry on several fronts, including how the studio will incorporate Fox’s IP into the existing Marvel Cinematic Universe, what they plan to do with the more niche Fox Searchlight team and the rollout of its Netflix-challenging streaming service, Disney+.

But with a 2019 slate that includes a live-action version of “The Lion King,” “Avengers: Endgame,” “Frozen 2” and “Toy Story 4,” Disney’s dominance doesn’t show any signs of ending soon.

2. The box office exploded this year

Despite what might seem like Netflix and other streaming giants’ best efforts to keep people at home, moviegoers are still going to the theater — and in droves. The domestic box office topped $1.8 billion this year, surpassing the $11.38 billion record set in 2016.

And it reached that total on the back of a year in which not all of the highest grossing films were billion-dollar franchises. Warner Bros.’ “Crazy Rich Asians” and “A Star Is Born,” Fox’s “Bohemian Rhapsody” and Universal’s “Halloween” reboot finished just outside the top 10 highest earners of the year. And in October, Sony’s surprise superhero hit “Venom” pushed that month’s total to an industry record high of $821 million.

A new study this year even suggested that those who stream movies and shows regularly also are regular ticket-buyers in bricks-and-mortar theaters: 31 percent of those who went to the theaters nine times or more in a year also reported at least 15 hours of streaming per week, compared to just 15 percent of responders who streamed as much but only went to the theaters once or twice a year.

3. Netflix continues to flex its muscles

It wasn’t long ago that critics and audiences at the Cannes Film Festival were booing when the Netflix logo ba-dum’d on the screens off the Croisette. A 2018 festival rule change banned any film that would not receive a French theatrical release from screening at the festival. And Netflix didn’t budge, withholding potential competition titles like Alfonso Cuarón’s “Roma,” Paul Greengrass’ “22 July” and the final Orson Welles film, “The Other Side of the Wind.”

But the streaming giant has bent a little toward defenders of theatrical releases. This year Netflix unveiled a brief theatrical release model for “Roma,” “The Ballad of Buster Scruggs” and “Bird Box,” screening the titles for just one to three weeks ahead of its streaming launch date to secure awards eligibility. In doing so, the streamer has appeased some Oscar voters and may have a real shot at securing at least a Best Picture nomination for “Roma.”

But that’s just the tip of the iceberg. Netflix film head Scott Stuber said in an interview with The New York Times that his company is providing viewers with a “choice,” to either watch a film theatrically or at home in a way that hasn’t previously been available.

And many filmmakers are buying into that argument, responding to the fact that the company is willing to finance projects from a wide array of directors with budgets that range anywhere from $20 million to $200 million. Netflix picked up Cuaron’s “Roma” from Participant Media after other distributors balked at the financial viability of a black-and-white, foreign language film. And Netflix has lined up projects from Martin Scorsese, Michael Bay and Noah Baumbach amid more streaming-friendly genre fare.

This year’s “The Kissing Booth” and “To All The Boys I’ve Loved Before” were not just big hits with teens: Netflix reported that more than half the viewers who watched either film actually rewatched them, exactly the sort of engagement Netflix wants if they want to continue to encroach on the film industry.

4. Original ideas still have a place at the box office

Part of the year’s success at the box office was because the film slate of 2018 made efforts to cater to diverse subsections of the audience — and moviegoers rewarded Hollywood for doing so.

“A Quiet Place,” John Krasinski’s high-concept horror movie that featured little dialogue and a disabled, teenage lead, earned a whopping $188 million at the domestic box office. It proved that along with films like “The Nun” and “Halloween” that the horror genre can make waves at any time in the year.

It should be no surprise that superhero films continue to stand atop the box office, accounting for 25 percent of all domestic box office revenue.

But what is different is how superhero movies are being welcomed into critic and awards circles. “Logan,” the swan-song film for Hugh Jackman’s X-Man Wolverine that played like a modernized, bittersweet take on the Western “Shane,” won the Oscar for Best Adapted Screenplay, the first such superhero film to do so.

Sony’s animated “Spider-Man: Into the Spider-Verse” scored a rare 100 percent from critics on Rotten Tomatoes upon its opening (it currently sits at 97 percent) for its whip-smart dialogue and ambitiously artistic animated style. And Ryan Coogler’s “Black Panther” became a cultural touchstone, a watershed moment for black cinema and representation on screen and all because it was packaged within a superhero genre framework.

That film’s awards dividends are paying off, already scoring Golden Globe and SAG nominations on its way to a potential Oscar nomination for Best Picture. And superhero juggernauts have also given  a boosted to talented directors. Patty Jenkins is returning to direct DC’s “Wonder Woman 1984,” Coogler has already been rehired for the “Black Panther” sequel, and Marvel hired indie auteur Chloe Zhao to direct “The Eternals” after her film “The Rider” wowed festival audiences.

6. Movies were as diverse as they’ve been in years

Just years removed from #OscarsSoWhite, Hollywood projected an unprecedented amount of diversity on screen in 2018, and it’s not a stretch to presume those films could be recognized at this year’s Oscars as well. Ryan Coogler’s “Black Panther,” Spike Lee’s “BlacKkKlansman” and Steven Caple’s “Creed II” were box office hits that likewise were assertive in their racial themes, staking a claim for black filmmakers and audiences that diversity matters at the box office.

Then there was “Crazy Rich Asians,” which headlined what some critics dubbed “Asian August.” Three films released that month boasted Asian American leads, including the Netflix hit “To All The Boys I’ve Loved Before” and the indie “Searching.” The box office success of these films helped to buck a stigma about what a leading man or woman looks like while also showing cultures not generally represented on screen.

“I just hope that this is not a trend. I hope this is steady, that it’s not just like a blip where everything came together and then nothing happens after this,” Lee said in TheWrap’s Oscar magazine. “We have to keep up the momentum.”

7. #MeToo Has a Reckoning

The Weinstein Company’s former dominance over the awards season has long since diminished, but the fall of one of Hollywood’s most powerful producers and the bankruptcy and sale of his studio was felt in a much different way this year.

The indie mogul Harvey Weinstein’s downfall after dozens of women accused of him sexual misconduct emboldened the Time’s Up and the #MeToo movement, triggering a wave of accusations that swept through studios, agencies and movie sets throughout Hollywood.

“Billionaire Boys Club,” which co-starred the now-disgraced Kevin Spacey, bombed big time on its theatrical release in August, earning just $618 on its opening weekend in 11 theaters.

And Weinstein’s absence was felt at the Cannes Film Festival, where dozens of actresses and directors stood on the Croisette for an impassioned speech demanding gender equality. Cannes was the place where many of Weinstein’s alleged acts of abuse occurred, as noted by actress and accuser Asia Argento, who called the festival “his hunting ground.”

And though Argento herself was accused of misconduct (a charge she denied), her speech at Cannes still stood as a reminder that there are many like Weinstein that have still not been accounted for. “Even tonight, sitting among you, there are those who still have to be held accountable for their conduct against women, for behavior that does not belong in this industry, does not belong in any industry or work place,” she said.

Photographed by Irvin Rivera for The Wrap