Lots of movies made a good showing in the last seven days. “The Last Station” and “The Messenger,” among others, got boosts from the Spirit Awards, “The Hurt Locker” won big at the Gothams and Clint Eastwood’s “Invictus” overcame a handful of middling reviews (including mine) with some key wins in the National Board of Review voting.

But among Oscar contenders, nothing dominated the week’s conversation the way Jason Reitman’s “Up in the Air” did. At times, my “Good Morning, Oscar” roundups felt like all-Reitman, all the time, as the director did countless interviews and charmed everybody (well, almost everybody), on the way to being named best film, best actor (a tie), best supporting actor and best adapted screenplay by the National Board of Review. (TheWrap’s interview with Reitman is here.) 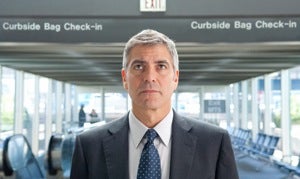 At the end of the week, the nationwide critics chimed in on the film with notices that were mostly raves: the film has an 86 percent approval rating at Rotten Tomatoes, 88 percent among top critics, and a score of 82 at Metacritic, including perfect marks from the L.A. Times, Washington Post, USA Today, Entertainment Weekly and Chicago Sun-Times (aka the massively influential Roger Ebert).

And I happen to agree with them. Here’s some of what I wrote back in early October, when the movie already had a deafening buzz: “The problem with seeing a movie like ‘Up in the Air’ after it’s already drawn rave reviews from almost everybody who saw it at Toronto and Telluride is that it can’t possibly live up to the inflated expectations. At least that was my worry before I saw Jason Reitman’s assured, beguiling and supremely timely film, which didn’t so much live up to the expectations as much as it just made them irrelevant … [I]t charms without pandering, touches without overreaching, and sustains a mood that feels true and essential in our tough times.”

Plus it topped all the Oscar pundit polls for the week. And Reitman now has more than 18,000 followers on Twitter who give him advice on where to eat. And every time I mention the guy I want to win the best-song Oscar, Ryan Bingham (who does the song “The Weary Kind” from “Crazy Heart”), I’m inadvertently mentioning the name of George Clooney’s character in “Up in the Air.”

Yes, maybe it’s just opening day and you’re already sick of hearing about it, but I don’t care. “Up in the Air” is hereby named the Odds’ first movie of the week.

To commemorate this grand occasion, here’s a featurette about Reitman and the film: