Let’s face it, “District 9” is not a frontrunner by any means.

It’s more like one of a handful of films hoping to slide into one of the last couple of slots in the Oscar best-picture race, slots that may be left open by the lackluster reaction to “Nine,” the lack of enough critics throwing their support behind “A Serious Man,” and the escape-hatch provided by the animated-feature category for voters who might otherwise go for “Up.”

But as recently as couple of weeks ago, director Neill Blomkamp’s film was considered an unlikely contender for those slots, at best a longshot hurt by its status as an action-oriented, science-fiction summer release. 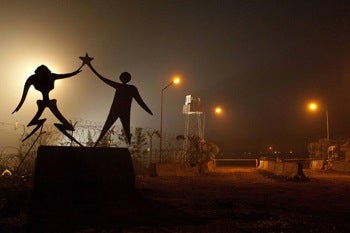 Then the Producers Guild of America made it one of the 10 best-picture nominees, the USC Scripter Awards invoked a rule change to put it in the top five, the Art Directors Guild gave it a nomination, and British Academy voters made it a semifinalist in 10 different categories.

Does all that make it a favorite? Of course not.  But it makes it a solid contender for the best picture slate.

And even though Blomkamp didn’t land a DGA nomination, the fact that he was even considered in the running was a sign of how far the film has come.  Less than one month ago, the Gurus of Gold panel at Movie City News had “District 9” ranked at number 21 on its list of best-picture predictions. By mid-December it had moved up to number 16, then number 14. In this week’s poll, it came in at number nine.

Around these parts, that’s enough to make “District 9” the Odds movie of the week.

So here’s the original short, “Alive in Joburg,” on which Blomkamp based his feature:

And here’s part one of a wide-ranging interview with Blomkamp in the L.A. Times’ Hero Complex blog.

And, you guessed it, part three.