Stock, debt, warrants, units and/or subscription rights may be offered “from time to time in amounts, at prices and on other terms to be determined at the time of the offering,” the company wrote in a Monday filing with the SEC.

Helios said that it intends to use the proceeds “for general corporate purposes of Helios and its subsidiaries and/or to support MoviePass and MoviePass Ventures operations.”

Helios owns 91.8 percent of MoviePass, which is a U.S. movie theater subscription service that provides subscribers the ability to view up to one new movie title per day for one monthly subscription price.

Shares of Helios + Matheson have had a rough go — and today’s news doesn’t change any of that. See below for a look at the stock’s performance over the last year, which is followed by a five-day snapshot best illustrating this morning’s decline. 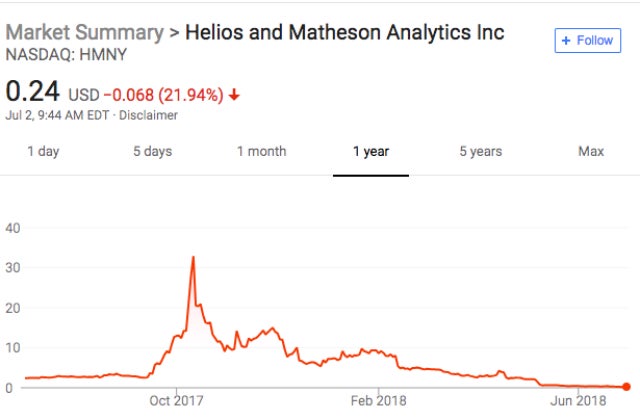 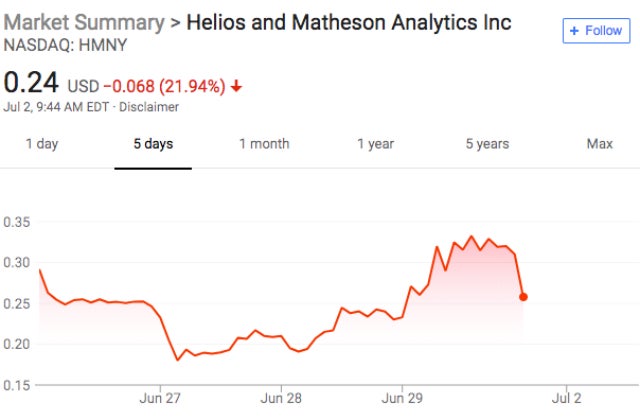 Helios + Matheson has poured tens of millions of dollars into the $10-a-month subscription moviegoing service, fueling its growth to 3 million-plus users.

But that subscriber growth has proven costly: The company reported $40 million in MoviePass losses in May and anticipated that to grow to $45 million in June — with just $18.5 million cash on hand as of May 31.

In an April filing with the Securities and Exchange Commission, Helios + Matheson reported losses of $150 million in 2017 thanks to MoviePass and the lower subscription price launched last August.

Last month, Helios + Matheson announced plans to raise $164 million through a bond issuance in an effort to help buoy the business and boost the company’s sinking stock price. Two days prior to that announcement, Helios + Matheson proposed a number of measures to bolster its stock, including a reverse stock split and a quadrupling of shares, to 2 billion from 500 million shares.

And those aren’t the only two options for box office buffs: Cinemark offers a Movie Club service where members get one ticket every month and 20 percent off concessions for $9 monthly fee.