Following a brutal day on Wall Street, MoviePass had a difficult early evening Monday as subscribers of the bargain movie ticket service complained that screenings were unavailable at many major movie theater chains.

In Los Angeles, the Landmark Theatre, a partner with MoviePass, was still available on the service’s ticketing app. But other chains including Regal, AMC, and Cinemark did not have any screenings available when selected. 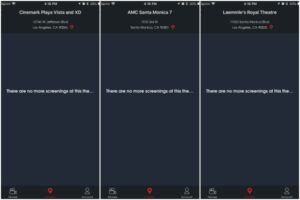 Meanwhile, reports have surfaced that MoviePass may entirely remove major releases from its service.

According to Business Insider, MoviePass CEO Mitch Lowe said at an all-hands meeting that the company is considering not offering tickets for two major August releases: the Disney live-action film “Christopher Robin” and the Jason Statham monster movie “The Meg.”

Last week, Helios & Matheson got approval from shareholders to perform a steep 1-to-250 reverse split of the company’s stock in an attempt to jolt its dangerously low price, which caused the stocks to temporarily jump to $22.50. but today the company is once again at risk of being delisted by NASDAQ for (again) falling below $1.

Monday’s dismal news follows massive complaints over the weekend from users who were not able to use the service to purchase tickets for the newly released “Mission: Impossible — Fallout.” While apologizing for the inconvenience on Friday, Lowe noted that MoviePass was trying to make changes to the service to make it more profitable without increasing the $9.95-per-month subscription price.

“As we continue to evolve the service, certain movies may not always be available in every theater on our platform,” Lowe said.

Shareholder confidence was likely shaken further by news that on Friday, Helios & Matheson borrowed $5 million to allow MoviePass to keep the subscription service operating. While MoviePass has boasted that its service has increased business at partnering theater chains and has encouraged moviegoers to try out indie films they wouldn’t otherwise go to, there has long been concern that the service would not be able to handle the demand to see major blockbusters during the summer season.

“On a general level, we’ve been pleased with our partnership with MoviePass. We’ve certainly seen it being used in our cinemas, but the long-term risks are something we’re aware of,” an anonymous regional theater chain owner told TheWrap at CinemaCon back in May.

“We don’t know exactly how many sales come from MoviePass. It just comes out as a ticket sold on our charts. But I’d have to imagine they lose money on almost every ticket and I do wonder if they could keep up with summer demand.”

MoviePass has over 3 million subscribers, and had been expecting to reach 5 million subscribers by year’s end. But while it fights to stay afloat, AMC Theaters, a longtime vocal opponent of MoviePass’ business strategy, has rolled out their own subscription plan over the past month. The new plan, called “A-List,” has a higher price tag for consumers at $19.95-per-month and offers three tickets per week rather than an unlimited amount.

However, “A-List” also includes perks like concessions discounts and the ability to use the service for premium screenings like IMAX and 3-D. Also, as CEO Adam Aron pointed out, the service isn’t in danger of going under.

“Our program should be beneficial for all involved,” Aron said. “A good deal for consumers, but being done at a sustainable price point where we will be profitable … and in turn, that we can share that increased profitability with our studio and premium format partners.”

Every 'Mission: Impossible' Movie Ranked, From 'Choose to Accept It' to Impossibly Good (Photos)

Where does “Fallout” rank?