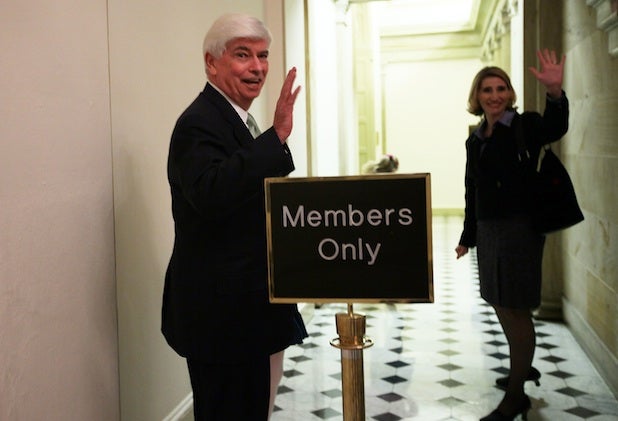 Foreign forces are conspiring against Hollywood, eager to weaken copyright protections that are crucial to the health of the film and TV industries, Chris Dodd, CEO of the MPAA, said in a speech Friday.

Dodd, the head of the entertainment industry’s lobbying group, was speaking at the Berlin Film Festival about globalization’s impact on entertainment — both positive and negative.

“The film and television industry stands at a crossroads today,” Dodd said in a speech Friday during the Berlin Film Festival. “Now, we can either stand by and watch silently as others who do not necessarily share our vision shape this remarkable industry’s future, or we can stand together and help  shape it ourselves.”

Dodd called on directors, producers, executives and legislators to stand up for their copyright protections as governments in Brazil, Australia, Brussels and elsewhere contemplate new laws governing intellectual property. Dodd believes these laws will weaken protections and make it easier for people to steal content Hollywood worked hard to create.

The MPAA has had a rough couple of years on this front. It was a fierce advocate of SOPA, an anti-piracy act Congress abandoned in the face of widespread public opposition. The organization trots out statistics about how much money the entertainment industry loses to piracy, though many of the most successful shows on TV, such as “Game of Thrones,” are also the most pirated.

Piracy continues to be a problem in countries like China, where a delayed release of a blockbuster movie in the country will shrink its box office returns. People disseminate pirated copies of the movie after it opens in other countries.

Congresswoman Judy Chu told TheWrap last year that the problem is far broader than such developing countries, and expressed a desire to reeducate Americans on the danger of piracy. Dodd rang a similar alarm in Germany, though he insisted Hollywood was not fighting technology — it is “technology dependent.”

Instead, he wants more people to recognize Hollywood’s content has intrinsic value and needs to be protected just as innovations in technology must be protected.

“The EU has significant “reform” plans on its agenda, and I fear those behind  these efforts to weaken copyright and IP protections do not seem to care whether the  producers, directors, and the hundreds of cast and crew members, who have spent time and effort to make these films, are compensated,” Dodd said. These anti-copyright voices say we are an antiquated industry, out-of-touch with the modern world. That we are trying to stifle the innovation and creativity that technology gives to every aspiring artist. They are wrong.”