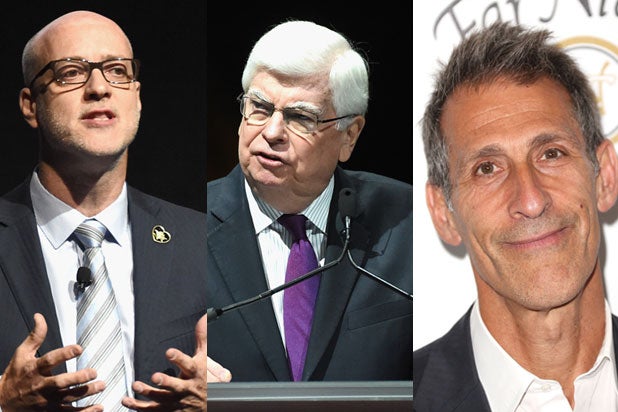 Last year’s bad blood between Sony and movie exhibitors following the unprecedented cyberattack of “The Interview” is water under the bridge, MPAA chairman Chris Dodd and John Fithian, who runs the national association of theater owners (NATO), said at the annual CinemaCon convention on Tuesday.

“I don’t sense any lingering problems. They love the cinema, we love their movies, and they’re here as our partner,” said Fithian, whose association represents 668 exhibitor companies around the globe. “We are glad they’re here. They’re a major supplier of product for our screens, and we understand they were up against incredible challenges.”

Fithian said he spoke with Sony Entertainment Chairman Michael Lynton in the wake of “The Interview’s” limited theatrical release and unprecedented VOD success, and “neither he nor I considered that release precedent for anything.”

At the time of the attack, theater owners pulled the theatrical release after hackers made threats against Sony if it distributed the film. Facing domestic criticism from no less than President Obama, the studio reversed and released the movie online and through a small number of independent theaters.

The hack also led to tension between Sony and the Motion Picture Association of America, which represents Hollywood’s major studios in Washington. As TheWrap previously reported, Lynton considered pulling out of the MPAA. Dodd said that is all in the past.

Also Read: 5 Burning CinemaCon Questions: From Melissa McCarthy's 'Spy' to Pixar's 'Inside Out'

“Sony categorically stated they are not leaving the MPAA,” he said on Tuesday. “We talk to them almost daily.”

Dodd said Sony was a victim of a criminal act and said that the publication of the studio’s private emails have “no public purpose,” and that Sony has a right to protect its proprietary information that was compromised in the hack.

Dodd and Fithian said they’re anticipating a great year for the box office, which is no surprise considering that Marvel’s “Avengers: Age of Ultron” and Disney’s “Star Wars: The Force Awakens” are aiming for the $2 billion mark worldwide.

Dodd also talked up the MPAA’s consumer-friendly site WhereToWatch.com, which launched in September. “It’s a simple idea,” explained Dodd, who said he wants to make it easy for people to identify where a film is playing in their local communities.

Asked whether the MPAA is considering cutting its membership dues, Dodd said he reviews the organization’s budget each year, though there is no plan in place for a reduction in fees. “I represent six companies who still feel that the best way to experience a film is in theaters.”