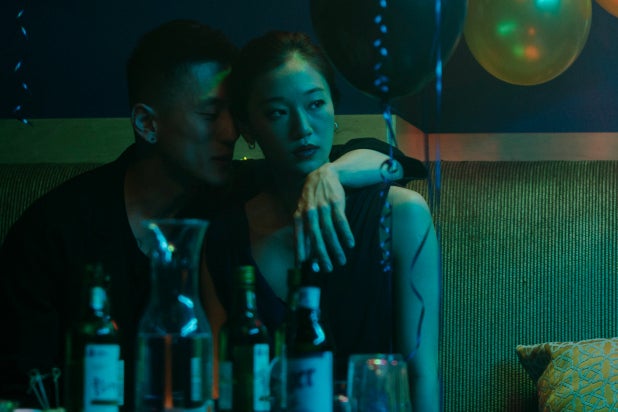 Loss is at the heart of Justin Chon’s searing new film, “Ms. Purple.” We fear it, dread it, don’t want to imagine our lives with it, and a number of us will fight like hell so not to lose the ones we love. But, as the long-suffering siblings of “Ms. Purple” learn, loss is every bit a part of living.

Kasie (Tiffany Chu) is the more responsible of the two. She’s trying to look after her terminally ill dad (James Kang), but after health aide after health aide quits, they tell her to make her peace with putting him in a hospice, where he can get better care. She refuses, eventually leaning on her wayward brother Carey (Teddy Lee) to come back home and help care for his estranged dad.

At nights, Kasie steps away from the domestic drama of her family to face another soul-crushing reality: her unpleasant job entertaining rowdy male clients at a karaoke bar, which as the movie shows early on, can turn dangerous or leave her vulnerable, even more so than she already is when dealing with her father’s impending death.

Chon, who co-wrote the script with Chris Dinh, plays on these dueling forces between brother and sister, life and death, happiness and security. Each layer is so beautifully, subtly explored, you can get lost in the characters’ emotions or just be swept away by Ante Cheng’s cinematography, which graciously soaks in the street and neons light of Los Angeles, the likes of which only Nicolas Winding Refn could top.

Yet, “Ms. Purple” looks more grounded. Not all of the lights are so pretty, even on the siblings’ happiest moments — and there aren’t many. The cinematography enhances the character’s moods, as when yellowing street lights saturate dim streets, making them seem more foreboding than welcoming. In one scene, a mournful Kasie stares out in the bluish-purple-tinged dawn, as if half-awake in a dream and a nightmare simultaneously. Her father is still dying just down the hall.

With minimal dialogue, Chu gives an incredibly heartfelt performance as the dutiful daughter with too many memories — of her father beating her brother, of the afternoon talks she shared with her now-dying father, how hard he struggled for his kids and the traumatizing scars left behind by her mother’s abandonment. She’s also having a hard time in her romantic life, and the movie is pretty upfront about its cold, functional state. Kasie is in an off-and-on relationship with a rich boyfriend who’s a spoiled playboy hookup, but she stays with him because of the security he offers her that her awful job could never provide.

In one scene, he takes her to get a traditional hanbok — in purple, of course — and it seems like he’s trying to mold her into who he wants her to be. Her ticket out of that suffocating life may be too steep a price for her to pay, but fortunately, she meets another working-class guy (Octavio Pizano) who offers her the different kinds of security money can’t buy, like a loving family and kindness.

With Lee’s character, it’s difficult to predict just how irresponsible Carey can be, but almost nothing deters him once he’s set his mind to it. For instance, after too long a time cooped up with his comatose dad, he drags his father in bed and pushes him to his local watering hole, a dive bar on the second floor of a strip mall. As freaked out as the bartender is by the sight of a nearly dead man pushed into his establishment by one of his cheap regulars, you get a sense that others feel for the weight Carey is carrying, both physical and emotional. Kasie gets little reprieve in this sense and is often forced to deal with her problems on her own.

As with Chon’s previous film “Gook,” Los Angeles plays itself in the most simple yet lovely ways, setting the scene for cultures to clash, mix and mingle together. There is healing and hurt on its streets, tiny dramas that play over every bus or train ride. Sometimes, the movie loses some momentum over the course of too many brooding, pensive scenes, but with the film’s slowly unfolding performances and deeply felt performances, it never overshadows the movie’s beauty.

“Ms. Purple” is a gorgeous film about one of the worst moments of many people’s lives, but isn’t the act of living just learning how to survive these irreplaceable losses?