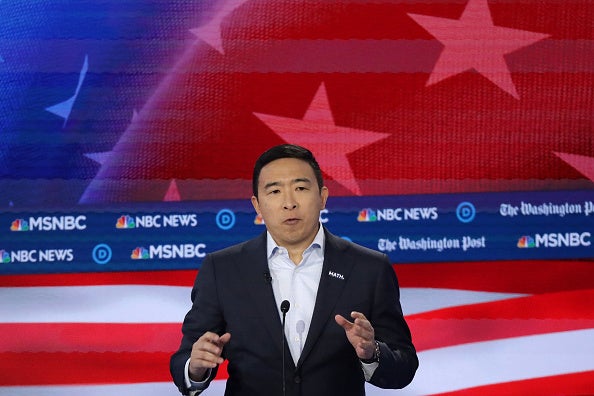 #BoycottMSNBC trended over the weekend after presidential hopeful Andrew Yang announced he wouldn’t be going on the network until he got an on-air apology for coverage of his campaign. A look back at that coverage reveals MSNBC has issued corrections for inaccuracies in its reporting on the Democratic candidate, so what more needs to be done?

When asked by TheWrap, a representative for Yang’s campaign pointed to the entrepreneur’s recent remarks on CNN: “Americans tuned into the debate earlier this week and they saw that I got called on less than any other candidate, including candidates I am polling higher than.”

He accused the network of omitting him from “over a dozen fundraising and polling graphics,” saying it was unfair to the Americans who have donated to the campaign.

When Yang was left off a candidate graphic on Nov. 17, MSNBC issued a correction on-air and on Twitter. On Oct. 4, MSNBC’s public relations team tweeted in response to his assertion he was left off a fundraising graphic by pointing out he announced his fundraising totals seven minutes after the graphic aired on television.

He tweeted that day, “I make mistakes all of the time. It’s part of being human.”

The campaign told TheWrap in a follow-up email he was referring to speaking time when he told CNN he was “called on less than any other candidate.”

A source with knowledge of debate mechanics told TheWrap that while it’s true Yang did get the least speaking time, he did not inject himself for follow-ups, nor did he mention or get mentioned by another candidate, all of which impacts speaking time.