MSNBC host Jonathan Capehart blamed the “twisties” for mistakenly trying to end his Saturday a show a few minutes before it was actually over.

Capehart, who was filling in for Tiffany Cross and her Saturday show “The Cross Connection,” had just finished an interview with actor-director Ruben Santiago-Hudson about Broadway’s planned return after the pandemic shutdown. 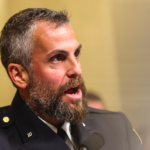 “That is our show for today,” he confirmed seconds later, signing off that Cross would be back next week for the regular show and moving to a commercial break.

He then handed off “The Saturday Show” to MSNBC’s Alex Witt for football news.

The host laughed it off and was lighthearted about the mixup afterward on social media, blaming the mistake on the “twisties” — the term that elite gymnasts like Olympian Simone Biles ues to describe a dangerous condition when they lose control of their bodies as they spin through the air are no longer able to complete their maneuvers or tell up from down.