MTV has opted not to bring back “The Hills: New Beginnings,” for a third season, TheWrap confirmed on Tuesday.

However, an individual with knowledge of the production has told TheWrap that the IP of the Los Angeles-set reality TV series will live on. And fans can always rewatch previous seasons of “The Hills” on Paramount+.

The 2019 revival of the original hit series, which ran from 2006 to 2010, brought back Brody Jenner, Audrina Patridge, Heidi Montag, Spencer Pratt, Frankie Delgado, and Jason Wahler, although not original star Lauren Conrad or Kristin Cavallari. 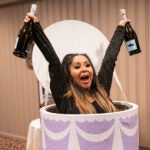 The second season, which was interrupted by the pandemic, aired last summer.

“The Hills: New Beginnings” was produced by MTV Entertainment Studios and Evolution Media.