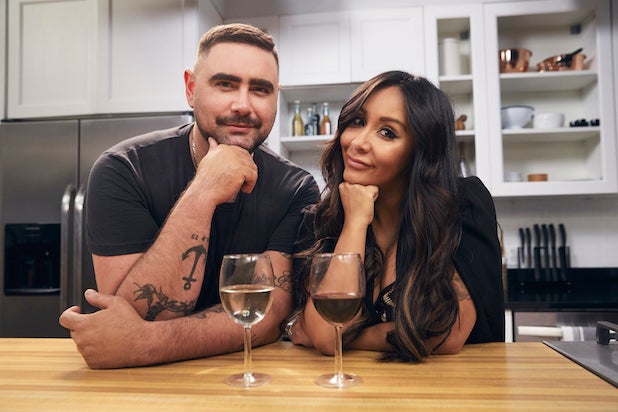 MTV wants “Jersey Shore” fans to get their fix even when they’re at the gym, tanning or doing laundry — and to make it happen, Viacom Digital Network is launching a standalone “Jersey Shore” YouTube channel on Oct. 18, dedicated to bringing fans exclusive content from their favorite cast members.

The channel will kick off with nine episodes of “Cooking in the Crib with Snooki & Joey,” a new weekly show where viewers hang out in the kitchen with cooking-challenged Snooki and her best friend Joey Camasta as she scrambles to figure out a new recipe. Episodes, which will feature a rotating cast of guests, will come out each Thursday at 4 p.m. ET.

And if you’re looking for more Snooki, she’ll be reunited with longtime housemate Jenni “Jwoww” Farley on “Moms With Attitude,” another YouTube-only show, where they’ll dish on all things sex, drinking, and, well, motherhood.

The first “Moms With Attitude” episode will premiere Oct. 28, with 14 new episodes coming each Sunday at noon ET.

The channel’s launch is the extension of a concerted effort from Viacom — MTV’s parent company — to “lean in” to digital platforms, Tyler Hissey, VP of Marketing and Social Media at MTV and VH1, told TheWrap.

And while the “Jersey Shore” channel will feature a weekly “Sneak Peeks” episode, and later include “Joey Reacts to the Jersey Shore,” where Camasta will weigh in on past hookups, Hissey said the channel won’t simply be about recycling old clips. Instead, MTV wants to make “platform-specific content” that’ll draw in the YouTube generation.

“As consumption habits change, people are going to go to different platforms to consume content. It’s less about having a ‘Jersey Shore’ YouTube channel to promote tune in, or really market the linear show,” Hissey said. “It’s more about creating content, using that [intellectual property] as the base, to engage ‘Jersey Shore’ fans in new ways.”

That echoed what MTV CMO and EVP Jacqueline Parkes said last week at The Grill conference at the SLS Hotel in Beverly Hills. “This is a generation that grew up swiping before they wiped,” Parkes joked. “They don’t make the distinction [between] a television or their iPhone or their desktop — when they see the content they want, they’re going to embrace that content.” In other words: MTV has to meet viewers where they are in 2018.

YouTube, of course, is a key part of that equation. MTV saw the opportunity for “Jersey Shore” — its “most popular linear show,” Hissey said — after “Wild ‘n Out” clips pulled in 95 percent of all views on MTV’s YouTube page. MTV decided to launch a solo “Wild ‘n Out” channel in July, which quickly racked up 2.7 million subscribers and hundreds of millions of views.

That response makes Viacom Digital Studios confident it’ll be a seamless fit for YouTubers. Along with the Snooki and JWoww shows, MTV is looking at other YouTube exclusive shows featuring other cast members, Hissey added. You can check out a “Cooking in the Crib with Snooki & Joey” clip below: