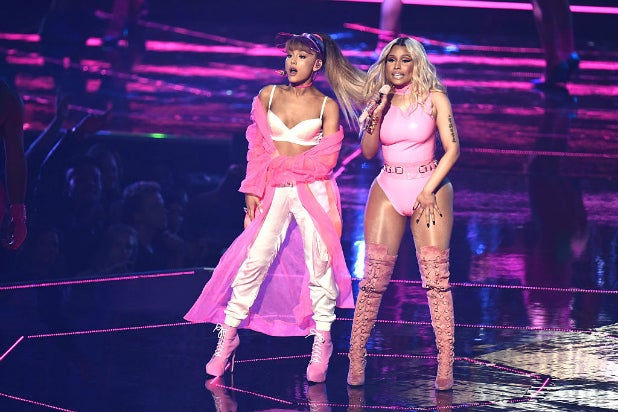 MTV’s Video Music Awards on Sunday gave awards to the top musical acts in a number of categories, with Beyonce and Fifth Harmony emerging as big winners.

Beyonce won the video of the year category for “Formation.” Girl group Fifth Harmony won for song of the summer with “All in My Head (Flex).”

The VMAs began with Rihanna performing a medley of her hits. Ariana Grande also performed with Nicki Minaj (pictured).

Here is a list of the top winners. Check back often to get the latest updates:

Song of Summer: Fifth Harmony, “All in My Head (Flex)” (announced during pre-show)

Male Video: Calvin Harris featuring Rihanna, “This Is What You Came For”

Video of the Year:  Beyonce, “Formation”

The Evolution of Britney Spears, From 'Baby One More Time' to 'Glory' and the VMAs (Photos)

She’s had a glorious career — but “oops,” hit some bumps along the way

It's Britney, bitch. Britney Spears' ninth album, "Glory," drops today, and the singer will celebrate with a performance at Sunday's MTV VMAs. Here's a look at how she got here.