Mumford & Sons guitarist Winston Marshall has quit the band so he can speak freely about political issues, he announced in a Medium post on Thursday.

In March, the guitarist took a break from the band following backlash on social media after he tweeted admiration for “Unmasked,” a book by right-wing writer and activist Andy Nygo. Marshall was accused of endorsing the far right.

In his medium post, Marshall, who plays guitar and banjo for the group, said, “I failed to foresee that my commenting on a book critical of the Far-Left could be interpreted as approval of the equally abhorrent Far-Right. Nothing could be further from the truth.” 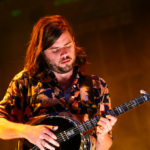 He said that while he was facing “ugly accusations,” his band members and friends were receiving it too. “The distress brought to them and their families that weekend I regret very much. I remain sincerely sorry for that. Unintentionally, I had pulled them into a divisive and totemic issue,” he wrote.

“The only way forward for me is to leave the band,” he continued.” I hope in distancing myself from them I am able to speak my mind without them suffering the consequences. I leave with love in my heart and I wish those three boys nothing but the best. I have no doubt that their stars will shine long into the future.”

Mumford & Sons was formed in London in 2007, and won the Album of the Year Grammy in 2012 for their record “Babel.” Marshall acknowledged the band’s success and longevity by writing, “Who in their right mind would willingly walk away from this? It turns out I would. And as you might imagine it’s been no easy decision.”

A spokesperson for the band has not yet responded to TheWrap’s request for comment.