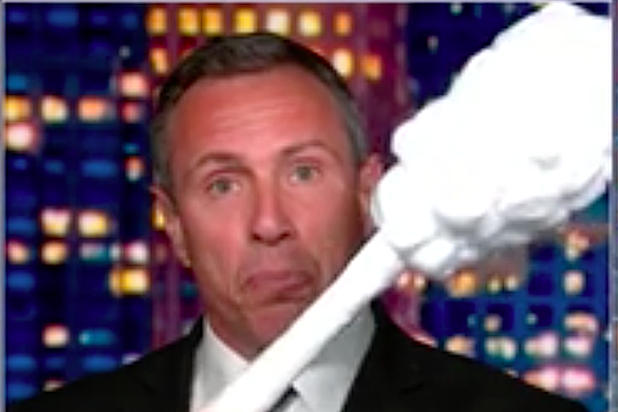 Tim Murtaugh, a spokesperson for President Donald Trump’s re-election campaign, appeared on CNN Monday night to do battle with primetime anchor Chris Cuomo and battle they did: The two argued for a full 13 minutes, during which Murtaugh produced a photo of Cuomo using a giant cotton swab prop.

Cuomo used that prop in May when discussing COVID-19 with his brother, New York governor Andrew Cuomo. On CNN Monday, he again brought up COVID-19, this time asking Murtaugh about why the president has seemed to lose focus on the pandemic.

“Your own brother, the governor of New York, said that every time he turned to the administration, the federal government was there with everything,” shot back Murtaugh.

Also Read: Gov Andrew Cuomo and CNN's Chris Cuomo Are Back to Squabbling: 'This Is Not Love' (Video)

From there, the two went back and forth over whether or not the governor really said that. (Trump and Gov. Cuomo trade barbs constantly, but the governor has offered up sporadic praise of the administration at specific times throughout the pandemic.)

Murtaugh went on, “I find it curious — speaking of your brother — you’re going to ask me these self-righteous questions and talk about people taking it seriously.”

He whipped out the photo of Cuomo with the giant cotton swab, asking if it looked like the Cuomo brothers were “taking it seriously.”

Cuomo said the moment was “funny as hell” before threatening to cut Murtaugh’s interview: “You took your swing. You missed. That’s the best you got, is that my brother didn’t take COVID seriously?”

Like the original cotton swab moment, the Cuomo-Murtaugh battle brought out strong reactions on social media. White House press secretary Kayleigh McEnany took aim at CNN — where she was once a paid commentator — in her praise of Murtaugh’s “epic smackdown,” writing, “The haters at CNN know the truth: Governor Cuomo praised President @realDonaldTrump‘s COVID response as ‘phenomenal.'”