Even those who love inspirational sports films might have to flinch from “My All American,” a movie so square, conservative and humorless that it winds up playing like a brutally straight-faced “South Park” parody of gridiron schmaltz, particularly in its last half hour, when the male weepie plot finally kicks in.

Based on a true story, “My All American” was written and directed by Angelo Pizzo, who wrote the screenplays for two beloved sports pictures, “Hoosiers” (1986) and “Rudy” (1993). In the latter, Sean Astin‘s Rudy was too small to play football but was determined to get on the field through sheer will to win and team spirit. In “My All American,” Freddie Steinmark (Finn Wittrock) is also a little too short to be playing football but, you guessed it, his team spirit is so overwhelming that he gets himself accepted to play for the Longhorns at the University of Texas in the late 1960s.

See Video: Finn Wittrock Gets the Girl, Makes the Team, and Suffers Brutal Injury in 'My All American' Trailer

In contemporary framing scenes, Coach Darrell Royal (Aaron Eckhart in laughable old age make-up) tells the tale of Freddie’s legendary team spirit to a curious reporter, and it cannot be said that this story is filled with much color or incident. Freddie’s Dad (Michael Reilly Burke) could have been a major league baseball player if an injury hadn’t sidelined him, and so he drives his son hard to succeed and achieve on the sports field, yet Freddie feels only blind respect and loyalty toward him.

Pizzo tips his hand in these early scenes by staging a family meal in the Steinmark home like some conservative daydream of peace and stability, and he doesn’t stop there: There are many scenes in “My All American” that represent blue-state pandering of the most obnoxious sort, like when the Coach says of New York, “Aw hell, I’ve never liked those big cities,” which is clearly meant to get a laugh of approval.

When the Steinmarks watch Freddie play ball on TV, they reverently applaud when President Nixon’s helicopter lands near the football field. Even more objectionable than this is a low camp scene where Freddie’s best friend Bobby Mitchell (Rett Terrell) tears up a protest sign and physically threatens some stereotyped hippie protesters after his brother gets killed in Vietnam. 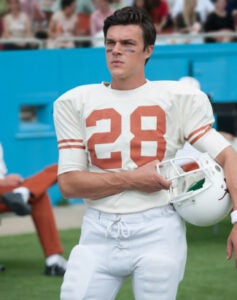 Back in their dorm room, the religious Freddie, who goes to mass every morning, counsels Bobby to pray for guidance even if he isn’t religious. In this scene, Wittrock does come across as one of those over-intense college guys who always wants you to go to church with them, but this role gives him nothing at all with which to work.

Last year as the psychopathic Dandy Mott on the FX series “American Horror Story: Freak Show,” Wittrock got to show off devilishly impressive amounts of actorly inventiveness, and as the season went on he added layered little curlicues of humor and menace, going way over the top in a grounded and intelligent way, so that you could tell that he was a trained actor who has worked regularly in the theater. In “My All American,” you would never know that Wittrock had such talent and fun in him. He seems like a young Tom Cruise here, eerily over-intense about everything, whether he’s wooing his girlfriend Linda (Sarah Bolger), praying, football training, or even tying his shoelaces.

Wittrock’s Dandy is still fresh for fans of “American Horror Story,” but we may need some reminding at this point that Eckhart got his start headlining acidic Neil LaBute movies in the late 1990s like “In the Company of Men” (1997) and “Your Friends & Neighbors” (1998). For those who remember those pictures, it is easy to wonder just how Eckhart can keep his poker face on during so many of his awful scenes here. His Coach Royal doesn’t have to give too many pep talks to the team, but he does have to deliver some gag-worthy lines: “You run like you have minnows in your pants,” the Coach muses to Freddie before accepting him on the team. Waxing faux heartland-lyrical over his wife, who was once his school sweetheart, the Coach tells Freddie, “I fell in love with her faster than a hiccup.”

Aside from these howlers, “My All American” also has serious structural problems. It takes an hour and a half of playing time to get to the main drama, and that 90 minutes is filled with mainly aimless football, lengthy and painfully generic courtship scenes between Freddie and Linda, and very little else. This is a movie that is confident in clean living, blinkered righteousness, and manly sentimentality, and it is shamed by some brief footage of the real Freddie at the end, an actual person whose story has been diminished by this slack, dawdling, offensive film.