I wonder whether 2002’s “My Big Fat Greek Wedding” would be the blockbuster today that it was then. I think not. I’m pretty sure my wife, a big fan of the original, wouldn’t be so enamored of it by today’s feminist standards, either. This, after all, is a movie about a 30-year-old woman — our heroine Toula, played by the film’s writer, Nia Vardalos — who needs permission from her father to take a college course.

She also proceeds to engage in stereotypical behavior that we’ve mostly come to eschew over the last 40 years of the women’s movement: She gets contact lenses, curls her hair and starts wearing makeup to represent an independent spirit as she goes after dreamy WASP Ian, played by John Corbett. This was not a feminist tome.

Its sequel, “My Big Fat Greek Wedding 2,” seems much more aware of the feminist movement; indeed, the rights, expectations and inclinations of the film’s female characters are its central subjects, alongside some slightly on-the-nose commentary about marriages getting stale and empty-nest syndrome. To wit: Toula is still married to the WASP but is now the hapless mother of a 16-year-old whom she’s afraid of losing to the world. Paris (Elena Kampouris, “American Odyssey”) plays the daughter who can’t wait to get far away from her mother and her big fat Greek family when she goes away to college. And who can blame her? These people are loving but irritating, and are constantly all up in her business.

The chafing of family ties provides the humor and the sweetness of “MBFGW2.” As in the first film, the jokes feature the sort of broad family characterizations that travel easily from one culture to another. They even recycle some of the jokes from the original movie: patriarch Gus (Michael Constantine) still has a predilection for Windex, and still believes that everything and everyone in the world is Greek and that all Greek girls should be committed to Greek boys just as soon as possible.

These jokes work mostly because they hearken back to the original film. The new material tends more toward the situational and the physical and winds up being less successful. When Gus gets stuck in the tub — naked, obviously — and the guys in the family have to manage an extraction with a strategically placed towel, it’s just not that funny. 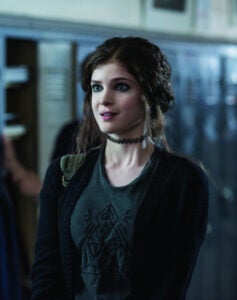 Gus pressures granddaughter Paris to find a Greek boy and go to college close to home, which is exactly what he did to Toula in the first movie. This time, however, he catches some blowback from the women in the family, including his beloved but obedient wife Maria (the ineffable Lainie Kazan) — to whom, it turns out, he’s not actually married. This is a plot point straight out of “Love, American Style,” but it leads to a storyline about women making choices for themselves and being recognized for all they do to make a family, a family. The feminism here is nowhere near radical, but the plot winds up having a little more girl power than the original. Plus, it gives the movie a good reason to have a big fat Greek wedding in it, and to have the number 2 in its title.

Kirk Jones (“Waking Ned Devine,” “What to Expect When You’re Expecting”) directs Vardalos’ screenplay for “My Big Fat Greek Wedding 2,” and he handles the production values and pacing well enough. Yet the film often has the air of a double-dip (or triple-dip, if you count the short-lived TV series) into a potential pot of gold at the end of a Big Fat Greek rainbow.

The filmmakers’ intention to follow in the predecessor’s footsteps is precisely calculated in every way, down to the inclusion of everyone who was in the original movie, from the brilliant Andrea Martin to Joey Fatone. (Yes, the guy from NSYNC. You probably don’t remember him being in the first film, and you won’t likely remember from this film either.) Then, just to make sure they’ve covered all the bases, they bring in a ringer, arguably the best-looking Greek man on the planet: John Stamos.

There’s no evil in that level of crowd-pleasing, so long as the movie isn’t awful, which “MBFGW2” is not. Indeed, it’s sweet, just like the original movie. It was faint praise then, and it still is.