What if there was real news, and old media didn't care enough to write about it?

Thanks to my friend Patrick Goldstein for pointing out my post on the lack of response from traditional media to yesterday’s news conference about the Motion Picture Fund fiasco. We come from the same place; he cares, for sure.

But Patrick took me to task for criticizing Old Media (and yes, I was Old Media until about five minutes ago), saying I didn't know if the L.A. Times was on the call or not. 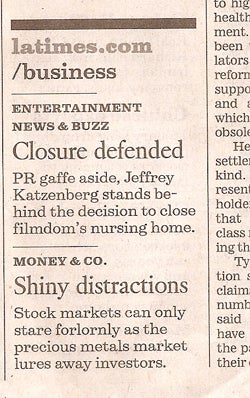 Which is what I said yesterday. (Here’s what I wrote: “ If the Los Angeles Times was there, its reporters were silent as a tomb.”) So I’m glad to know that the very discreet Richard Verrier was there.

And while Verrier did blog about it briefly on the web, here is the sum total of what the newspaper ran in its pages. (see left)

One sentence. At the bottom of the inside page of the business section. Wow.

The news conference was at 11:30 am. Not very hard to make deadline in that instance. As for why this local story that has raised such high emotions only merits one line in a major newspaper that is always eager to write about Jeffrey Katzenberg and 3D (not that there's anything wrong with that) – perhaps Patrick, or Richard, or an editor might know.