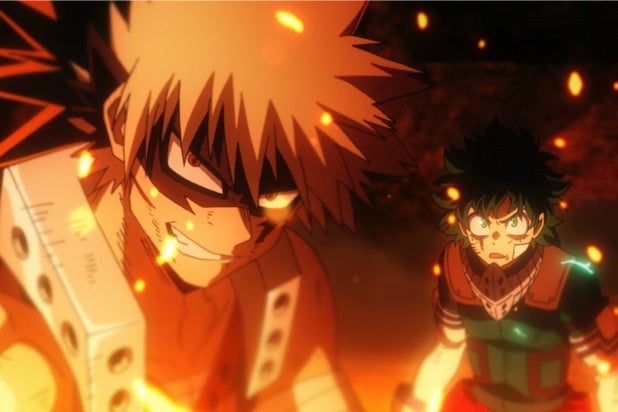 It’s hard to imagine that a general American audience might take to new Japanese anime “My Hero Academia: Heroes Rising” beyond the already robust fanbase of “My Hero Academia,” the popular shonen-style boy’s adventure manga and anime about teenage superhero Izuku Midoriya (voiced by Justin Briner, in the English-dubbed version) as he leads his super-powered high school classmates in becoming better team players and aspiring heroes.

Which isn’t to say that uninitiated moviegoers will have trouble understanding the plot of “Heroes Rising,” which follows Izuku and U.A. High School’s Class 1-A as they try to stop multi/over-powered villain Nine (Johnny Yong Bosch) from killing the residents of Nabu Island. “Heroes Rising” is, like the ongoing anime that it supplements, full of expository dialogue and flashbacks that help new viewers understand what they’re looking at, and why it matters.

Still, it’s hard to imagine anybody but fans caring about the movie’s big climax, which teases big changes to the anime’s status quo that are ultimately not delivered in the movie. “Heroes Rising” is fine for what it is; its main highlight is a well-choreographed and genuinely tense blow-out brawl between Nine and almost all of Class 1-A. This new movie delivers more of what the anime has to offer fans, and very little else.

“Heroes Rising” sticks to the anime’s narrative formula: Midoriya and the gang become the unexpected targets for a mysterious threat whose seemingly indomitable strength reveals how dependent the show’s superpowers-filled world is on the protection and symbolic virtue of All Might (Christopher R. Sabat), a square-jawed, broad-shouldered Ubermensch who describes himself as the world’s “Symbol of Peace.”

Midoriya, being All Might’s apprentice and successor, trains hard to be worthy of his mentor’s powers, but is ultimately one part of Class 1-A’s ensemble of teenage misfits, which includes class pervert Minoru Mineta (Brina Palencia) — whose body generates dozens of sticky purple balls that he throws at anything or anybody he wants to stay put — and Midoriya’s hot-head rival Katsuki Bakugo (Clifford Chapin), who yells a lot and blows things up real good. Class 1-A usually flounders for a while, and then digs in their heels and work as a team to fight the latest revenge-driven villain to threaten Japan and the world, too, probably.

This type of sturdy narrative template serves “Heroes Rising” well, since a chunk of the movie’s back half is a long siege-style battle between Class 1-A and Nine and his supervillainous heavies. (He’s allied with a chimera-like beast-man and a Medusa-lady whose hair turns into blades!)

Like Midoriya, these side characters are mostly interesting for how they use their powers; they’re not really well-developed beyond a few isolated, flashback-intensive episodes, and even those don’t add much complexity to the main cast members. Then again, that shortcoming is also a well-established (and even conventional) feature of both this specific anime and for shonen-style anime, like Dragon Ball Z and One Piece, in general. Still, “My Hero Academia” appeals to a wide cross section of anime fans because it delivers light-hearted action scenes that are grounded by enough character-driven melodrama to make them feel consequential.

“Heroes Rising” exemplifies the anime’s better qualities while never transcending them, especially since much of the movie’s success depends on a fight that concludes with Midoriya sacrificing his ego and/or body in order to defeat yet another otherwise unbeatable foe. It’s a by-now familiar story, especially now that the anime is more than 80 episodes and almost ten story arcs into its run. But while Nine is a little too similar to All Might’s nemesis One for All — or any of the series’s other main villains, all of whom are obsessed with exposing superheroes as vainglorious, power-mad hypocrites — the filmmakers do make him seem, from scene to scene, like an immediately credible threat.

Established “My Hero Academia” fans will probably enjoy Class 1-A’s typically endearing group dynamic, even if none of the jokes in the movie are that great. And their big fight with Nine is genuinely well-staged and climactic, thanks to some impressive computer graphics and director Kenji Nagasaki’s thoughtful staging and choreography. Making the kids fortify and wait in an isolated central location, a hilly area overlooking the rest of Nabu Island, also highlights the series’ knack for high-concept plot devices, including a competitive sports festival (season two) and a dodgeball-like battle royale between super-schools (season three).

From there, it’s just a matter of setting Nine and his fellow villains up to approach and relentlessly block Class 1-A’s attacks. This multi-part set piece’s fantasy action choreography — featuring lots of explosions, bad weather, flying, feats of strength, and lasers — is thankfully engaging enough to be worth the price of admission.

There’s only one unexpectedly frustrating aspect of “Heroes Rising”: A last-minute plot twist that teases big changes for the main series, but is ultimately a flimsy deus ex machina plot device. “My Hero Academia” fans might appreciate being flattered by “Heroes Rising,” but newcomers would be better off starting with the anime’s first season.