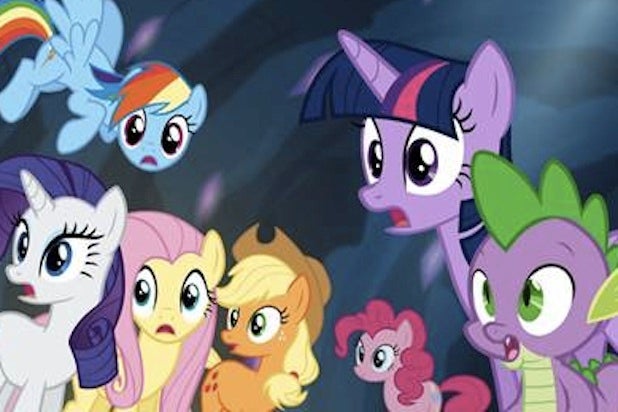 Hasbro Studios has hired Joe Ballarini  (“Dance of the Dead”) to write a “My Little Pony” movie, TheWrap has learned.

Hasbro will produce the animated feature under its Allspark Pictures label, which allows the company to self-finance or co-finance projects. Allspark’s first release will be “Jem and the Holograms,” which was co-financed by Universal and co-produced by Blumhouse.

Megan McCarthy will co-executive produce the full-length feature, having written for Discovery Family’s popular TV series “My Little Pony: Friendship Is Magic.” McCarthy was also involved in the “My Little Pony: Equestria Girls” movies, which received limited theatrical releases prior to their debuts on home video.

The “My Little Pony” franchise features a rich mythology built around characters that have colorful bodies and manes among other distinguishing attributes.

Hasbro currently plans to self-finance the development and production of the “My Little Pony” movie, which it is currently talking to distributors about releasing in 2017.

Hasbro plans to continue making action-heavy tentpoles aimed at young men, such as the “Transformers” and “G.I. Joe” movies at Paramount, and the company continues to develop board game adaptations “Monopoly” and “Candyland.” Because all four of those films are big-budget projects, Hasbro has less say on the creative side, but it will have more control on the “My Little Pony” movie.

“My Little Pony” has garnered headlines of late due to its popularity with adult men who refer to themselves as “Bronies,” which signals the brand’s ability to transcend typical gender and age lines.

News of the “My Little Pony” movie was first reported by Variety.