Acclaimed Chinese filmmaker Nanfu Wang’s gripping documentary “In the Same Breath” recounts the origin and spread of the novel coronavirus from the earliest days of the outbreak in Wuhan, China to its rampage across the United States. The filmmaker was a Sundance Film Festival juror in Park City, Utah on January 23, 2020 — the same day Wuhan went into lockdown during the first COVID-19 outbreak.

Wang was coordinating in Park City with various camera crews running on the ground in Wuhan.

“I was working with people in China we had a chance of filming one station in the ICU room, one is filming in the ambulance following first responders to get patients, and another one filming people in quarantined homes so we had like all these people working,” Wang told TheWrap editor in chief Sharon Waxman at TheWrap’s Sundance Studio presented by NFP and National Geographic.

So how was Wang able to pull this off? “It requires a lot of producing,” Wang explained. “We had a good producing team, field producing and here. It took a lot of effort to find those people, half of them were people that I’ve collaborated before and we had mutual trust. And another half I would say are people who are new/who would recommend them to us who like we called and vetted and then established the relationship.”

“So it took quite a while to get to that point. So it starts with the first person filming in the ICU, and then the emergency center, and then we have more people gradually it expanded to filming at different places at different times,” she added. 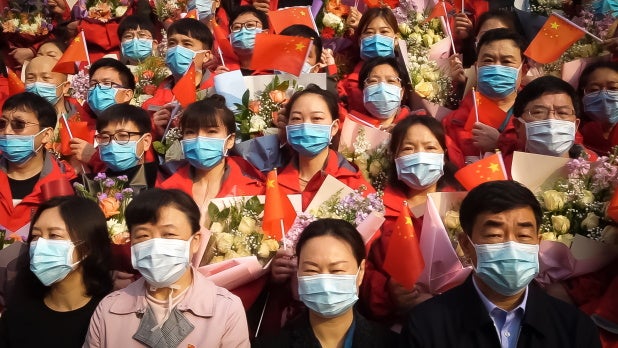 Wang and her camera crews were able to get the disturbing and hard-hitting footage of people in Wuhan trying to cope with the outbreak, while it was censored and not spoken on Chinese state-run media.

“I think the Chinese government was really effective in shaping the narrative of how it responded to the outbreak, and oftentimes I think not only within China, but the Western media what they are seeing is how effective the Chinese government has responded to it,” said Wang. “It’s like, ‘Oh, China is great now,’ but footage like that or stories like that — people who died at home, people who couldn’t get access to the hospital, the hospitals were turning people away, and they died on the streets, they died in the lobby waiting for their bed — those stories did not come out or it was not allowed to be told.”

“Our camera people, some of them were there and happened to see a lot of those stories,” added Wang.

HBO has not yet announced a premiere date for “In the Same Breath.”