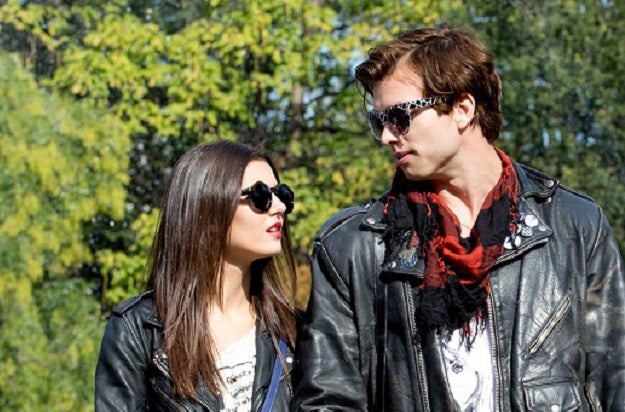 Based on a popular novel by Rachel Cohn and David Levitan (whose book “Nick and Norah’s Infinite Playlist” got transferred to the screen in 2008), “Naomi and Ely’s No Kiss List” takes place among the young and restless of Manhattan, between lifelong besties and next-door apartment neighbors Naomi (Victoria Justice) and Ely (Pierson Fode). They grew up together, became thick as thieves in adolescence, and now — as adolescence stumbles, foal-like, on wobbly legs out of college and into adulthood — the fact that both of them have a weakness for men is starting to work as a wedge between all parties involved, complicating their friendship and dating lives, especially as they both do love each other, in varying complicated ways.

Director Kristin Hanggi invests the material with plenty of gloss, aided and abetted by the good-looking Forde and Justice, who both spend a startling amount of the movie showing their abdomens. But “Naomi and Ely’s No-Kiss List” feels as adolescent as, well, the titular inventory — an agreed-upon subset of boys that neither can approach due to one of them expressing an interest, which is supposed to delineate the borders of their status of besties. But the film feels shallow and glib, which often adds breeziness but more often undermines the movie: When Ely has to hide his interest in Naomi’s might-be-boyfriend Bruce (Ryan Ward), the model is less “Jules and Jim” or “The Unbearable Lightness of Being” and more “Three’s Company,” full of scams and schemes and slammed doors as Bruce is shoved, all too literally, into a closet.

There’s a little brisk venom in the dialogue as things fall apart — watching Naomi flirt with the doorman in their building after they’re on the outs, Ely cuts her down to size: “Really, Naomi? And that skirt hasn’t fit since 2010.” But a film made of romantic near-misses and almost-kisses needs more than just surface charms and catty fights, and “Naomi and Ely’s No Kiss List” stays resolutely cheery, charming and forgettable; it feels less like a movie that should go straight to video and more like one that should go straight to Snapchat: Seen, enjoyed, then disassembled to the vapor from whence it came.

Technically, the film’s low budget occasionally shows through: There are odd dead spots in the dialogue recording, and some of the choices by cinematographer Anka Malatynska stick out more than they should, blurring and bending the sides of the scene until you literally can’t help noticing the camerawork. But there’s something good and true at the heart of all of the films’ postures and glamour, a film that’s more about Naomi and Ely trying to negotiate the transition into adulthood in light of the past than it is about Naomi and Ely negotiating their friendship in spite of boys. It’s too bad we don’t get more of the former.

Those deeper moments are few and far between, though: “Naomi and Ely’s No Kiss List” is deeply committed to being shallow. It’s a movie where big personal changes happen in montage, bouncy pop songs moving the plot along with the rubbery chime of their chord changes. As performers, both Justice and Fode do well with the material, bolstering it even more when the script is strong and getting through the moments where it is not especially so as best they can. Matthew Daddario is also good as a doorman who goes above and beyond the call of duty with Naomi, charming and plain-spoken in a way the leads don’t get to be.

A movie that often feels like its own Tumblr pages — mostly images and songs, smiles and costume changes — “Naomi and Ely’s No Kiss List” demonstrates promise and passion on the part of many of the people on camera and behind it, but it’s a little too slick to truly stick.