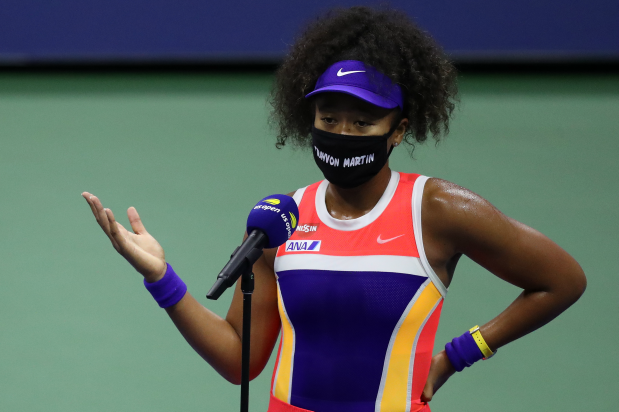 After prominently wearing specially made face masks at the U.S. Open, tennis player Naomi Osaka got a surprise thank you message for protesting police brutality and racial injustice at the Grand Slam event.

For each round of the competition so far, Osaka has worn different black face masks with the names of people who died as a result of racism or police brutality: Breonna Taylor, Elijah McClain, Ahmaud Arbery, Trayvon Martin and George Floyd. And during a post-match interview Tuesday on ESPN, the parents of Martin and Arbery appeared in a video to thank Osaka for her support. Watch the video below.

"I feel like I'm a vessel at this point in order to spread awareness."

Trayvon Martin's mother and Ahmaud Arbery's father thanked Naomi Osaka for representing their sons on the masks she's been wearing throughout the US Open. pic.twitter.com/0IHBU7pvx4

“It means a lot,” Osaka said after watching the video. “They’re so strong … I feel like I’m a vessel, at this point, in order to spread awareness. I don’t think it’s going to dull the pain, but hopefully, I can help with anything that they need.”

I often wonder if what I’m doing is resonating and reaching as many people as I hope. That being said, I tried to hold it in on set but after watching these back I cried so much. The strength and the character both of these parents have is beyond me. Love you both, thank you ❤️ https://t.co/FSDLtWNJDr

Also Read: Kenny Smith Walks Off 'Inside the NBA' Set to Stand With NBA Players' Protests Over Jacob Blake Shooting

Breonna Taylor was killed by Louisville Metro Police Department officers on March 13. Police entered her apartment on a no-knock search warrant and fired their guns. Taylor was shot at least eight times.

Elijah McClain died in August 2019 in Aurora, Colorado, after police received a call about a suspicious person. Officers arrested McClain and, during a struggle, one put him in a chokehold. McClain briefly lost consciousness, and paramedics later sedated him. He had a heart attack on the way to the hospital and was pronounced dead a few days later.

Ahmaud Arbery was killed while jogging in Glynn County, Georgia, on Feb. 23. He was pursued by white men in two vehicles before one got out and shot him.

Trayvon Martin was just 17 when he died in February 2012. He was walking through the neighborhood of his father’s fiancee when he was followed by a community watch member. George Zimmerman reported Martin to the police, and after a struggle, he shot and killed Martin.

George Floyd died on May 25 after a store clerk told police he used counterfeit money. During the arrest, an officer put his knee on Floyd’s neck for about eight minutes. He was motionless toward the end of that time. Police did not treat him before paramedics arrived.

After her first win in the competition, Osaka explained that she has seven masks — one for each round. “It’s quite sad that seven masks isn’t enough for the amount of names, so hopefully I’ll get to the finals and you can see all of them.”