The CW has released the first teaser for its next superhero installment, "Naomi." And things are already a bit of a struggle for the show's titular hero.

In the footage released during DC Fandome on Saturday, Naomi (Kaci Walfall) is in class, seemingly gearing up for a debate of some sort. But, before she can start, she gets a text from her friend Annabelle, alerting her to a "stunt" happening nearby, that involves Superman.

Naturally, Naomi needs this for her site -- though it's not immediately clear what site that is -- and skateboards off to try and see whatever the Man of Steel is up to. But, as she makes her way to the square, things start to go fuzzy, causing her to fall to the ground as Superman flies off.

Of course, to figure out what's really going on, we'll have to wait until 2022. But for now, you can watch the full teaser in the video above. 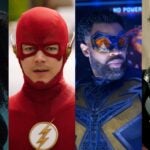 Also Read:
‘The Flash’ to Kick Off Season 8 With ‘Armageddon’ Crossover Event

Exactly which Superman Naomi is attempting to see is unclear at this point. The logical first guess would be Tyler Hoechlin's Man of Steel, considering he's the current Superman of the Arrowverse, where "Naomi" is taking place. But, lest we forget, he's not the only Superman of that multiverse. Crisis on Infinite Earths may have reset things, but there's still a multiverse, and it includes more than just Earth-Prime.

And "Naomi" -- based on the DC Comics character of the same name from Brian Michael Bendis, David F. Walker and illustrator Jamal Campbell -- follows the “effortlessly cool and confident high school student” as she discovers she has the ability to travel across said multiverse. So really, she could be anywhere.

According to the show's official synopsis, "what she discovers will challenge everything we believe about our heroes." Joining Kaci Walfall in the project as series regulars are Alexander Wraith (“Orange Is the New Black,” “Marvel’s Agents of S.H.I.E.L.D.”), Cranston Johnson (“Filthy Rich,” “P-Valley”) and newcomer Camila Moreno.