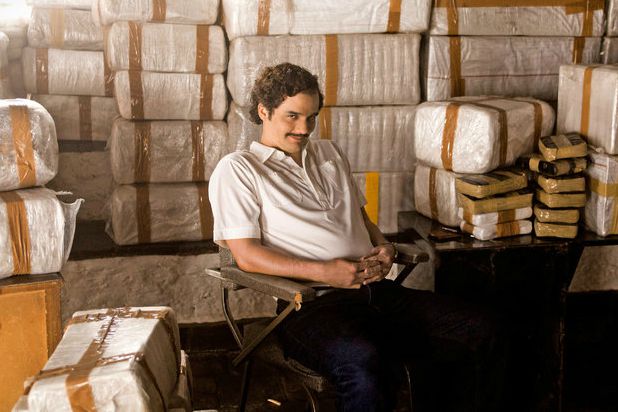 Men like Pablo Escobar aren’t born monsters. They become them.

And as viewers who’ve been binge watching the thrillingly addictive new Netflix drama “Narcos” — which is now streaming — can attest, finding out how Escobar rose in power and status to become a murderous megalomaniacal drug lord is as fascinating as it is frightening.

This is due in large part to the masterful performance Brazilian actor Wagner Moura (“Elysium”) delivers as Escobar. Menacing but never melodramatic, Moura is exceptionally convincing and subtle as a man determined to do whatever it takes to become rich, powerful and feared and stay that way.

The fact that Moura packed on extra pounds and moved to Escobar’s hometown of Medellin, Colombia to learn Spanish and better understand the real-life man and culture behind his character is abundantly apparent and satisfying at nearly every turn.

While there are those who will argue that Benicio Del Toro‘s turn in 2014’s “Escobar: Paradise Lost” trumps Moura’s, it must be noted that Moura has the advantage of time and space to ruminate in the role and make a longer lasting and more compelling impression on audiences of the 10-part series.

In one scene in the pilot episode, for instance, Escobar convinces Colombian police officers to turn a blind eye when it comes to one of his nefarious shipments by addressing each officer by name and asking about their individual loved ones.

On the surface, it seems like Escobar is genuinely plugged in to the people, taking the time to inquire about a mother in the hospital and a teenager learning to drive. But Escobar was anything but compassionate when it came to business and what he was really doing was letting the men know that if they tried to stop him, he would kill them and come after their loved ones, too.

In another episode, a steely Escobar cunningly bribes a law enforcement official to tell him who tipped them off and double crossed him. However, money isn’t the only thing that drove Escobar and creators Chris Brancato and Paul Eckstein smartly portray him as a man capable of abundant love and sadism, fussing over his wife and mother in a number of scenes and using a gun during foreplay with his mistress in another.

The drama’s only glaring flaw is that there isn’t more Escobar. Instead, “Narcos” is chronicled through the eyes and voiced-over narration of a mostly straight-laced and dull DEA agent Steve Murphy (Boyd Holbrook, “Gone Girl”). More John Wayne than Jimmy McNulty, Murphy is a man who wants to “do good” and nearly ruins the series because of it. Compounding the issue, Murphy’s voice-over commentary is excessive, occasionally states the obvious and at its worst, takes you out of the moment.

Even with its flaws, “Narcos” is a provocative show worth the watch. For history lovers and anyone who has seen “Entourage” or the documentary films “Cocaine Cowboys” “30 for 30: The Two Escobars” and “Sins of My Father,” this series culminates every factoid and tale you know about Escobar and takes them to new heights. What an exciting undertaking. No wonder FX’s John Landgraf is afraid.

“Narcos” is streaming on Netflix.