If Daniel Johnston’s “True Love Will Find You in the End” is the dominant track throughout a film, chances are the world depicted therein will be an insular one. Writer-director Sebastián Silva’s “Nasty Baby” follows three New Yorkers who are over-the-moon about their friendship and singularly focused on the woman (Kristen Wiig) becoming a surrogate for her gay-couple BFFs (Silva and TV on the Radio’s Tunde Adebimpe). That is, when they’re not covering up a murder, after which their cooler-than-thou hipness allows them to go roller-skating.

If that summary sounds like it’s a mash-up of two different movies, it practically is. “Nasty Baby” starts out as a light-hearted drama about a wannabe modern family of Polly (Wiig), Freddy (Silva), and Mo (Adebimpe). Because Polly is closer to Freddy than Mo, they initially try to conceive, but it’s quickly revealed that Freddy is an unlikely candidate. The next logical choice is Mo, but for reasons unknown, he expresses reservations. Still, their interaction as friends is impressively natural, with humor, good nature, and an assumption that their hearts will go on together even after prickly moments.

Also Read: Bill Murray Credits Kristen Wiig, Melissa McCarthy for 'Ghostbusters' Cameo: 'They Are Tough to Say No To'

“Prickly” is also an appropriate description for the men’s dealings with their neighbor, Bishop (Reg E. Cathey, “House of Cards”). Bishop cranks up his leaf blower every day at 7 a.m. and sells goods that likely fell off a truck for a dollar on his stoop. Freddy, the hot-headed one, regularly antagonizes him — using the common ruse of hotheads that he just wants to talk and get Bishop to show some courtesy. When Bishop tries a little too hard to help Polly carry something heavy one night, however, the gloves come off.

Silva’s previous films, 2013’s “Crystal Fairy” and 2009’s “The Maid,” were largely irritating because of their characters yet somewhat redeemable in plot. It’s little surprise, then, that besides Bishop — who is clearly unbalanced — Freddy is the most grating personality here. He’s also, admittedly, often a sweetheart and even charming. But in addition to his temper, Freddy’s also a performance artist, one too avant-garde to get behind. “Nasty Baby” is also the title of his latest project, borne of his obsession to have a child: His initial pitch to a museum curator is a video of him, naked and squirming and crying like an infant. He eventually lets others on board, including Mo, Polly, and his assistant, Wendy (Alia Shawkat, still unable to find a good role since “Arrested Development”). 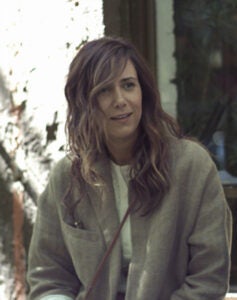 Ironically, when the curator reveals that he consults an “oracle” to make his decisions for him, Freddy says, “It’s just so weird. I don’t get it.”

The project, and the hoped-for pregnancy, are dropped in the third act in favor of a more menacing matter that shifts the tone to ink-black. And had the film not leaned so heavily on family matters for the majority of its run time, that switcheroo could have worked. Silva does manage to introduce discomfort slowly, but the manner in which things go very, very wrong is dealt with superficially — let’s just forget the deer on a dark road, whose stare at those in the car ridiculously seems to be meant as judgment — and the OMG!-ness is over too quickly.

With Freddy being mercurial and Mo often impenetrably low-key, Wiig’s Polly is the film’s appealing character. (It must be said, though, that all the actors have an easy, sweet chemistry.) It’s refreshing to see Wiig finally play a role that comes across as an actual human being, as opposed to her recent parade of sulky, mentally unstable characters. Polly isn’t “Bridesmaids” funny, nor is she “Hateship Loveship” blank; she’s just a friend who’s winningly unremarkable, if occasionally juvenile.

“Nasty Baby” ends abruptly, the morning after the dirty deed, which is frustrating enough. But then additional, completely incongruous footage runs during the closing credits. One assumes that this action is happening on the same day, which slams the brakes on any goodwill you had for the characters — and makes you wish they’d stayed in their myopic Brooklyn world, believing they’re above it all.