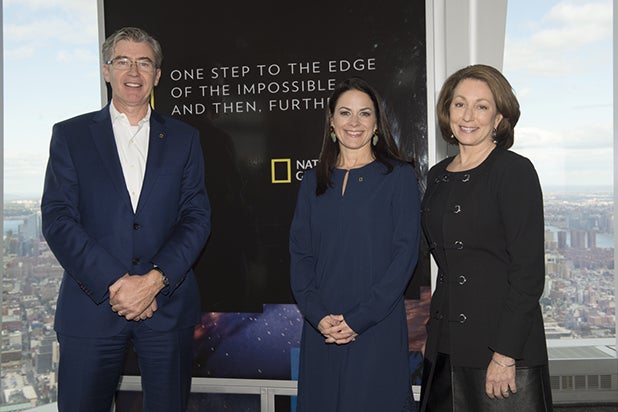 National Geographic announced a new global rebrand at an event from the One World Trade Center in New York City on Wednesday.

With the addition of the new tagline “Further,” the rebrand will affect all aspects of the company, including the visual presentation of the global channels in 171 countries, the iconic magazine, NationalGeographic.com, all of the company’s social and digital platforms and the National Geographic headquarters in Washington, D.C.

The company will now share one logo (below) across all of its media platforms, and will eventually be expanded to include a “Further” section in National Geographic magazine, a “Further” web series and more consumer-facing activations to be announced.

“A year ago we combined all of our content platforms into one company, establishing an unparalleled and enviable global reach for our iconic brand, which touches over 730 million consumers every month,” Declan Moore, CEO, National Geographic Partners, said. “Now, as we reimagine our business for the 21st Century, this rebrand — the largest in our history, and possibly the largest of any integrated media company — reinforces to consumers and the marketplace, with a singular vision, the power of the National Geographic brand as well as the premium, visually spectacular nature of our storytelling across every platform.”

On television, the network will drop the word “Channel” as part of the rebranding effort, which is timed to coincide with the premiere of the Brian Grazer-produced event series “MARS” on Nov. 5.

“This rebrand marks a significant turning point in the realization of our transformational new vision for National Geographic Channel,” Courteney Monroe, CEO, National Geographic Global Television Networks, said. “As a new brand positioning statement, ‘Further’ aligns perfectly with our new premium programming strategy, which is built on quality, distinctiveness and the relentless pursuit of creative excellence. The new visual design is sophisticated, contemporary and cinematic and lives up to the promise of the National Geographic brand.”