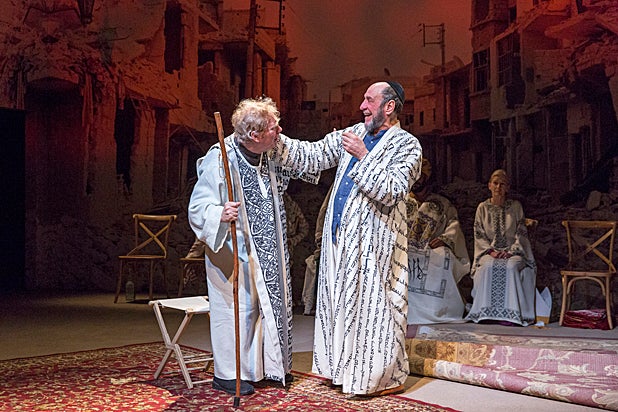 Gotthold Ephraim Lessing never saw his 1779 play “Nathan the Wise” performed. Apparently, the Roman Catholic Church in Germany didn’t care for its message of religious tolerance, which put Christianity on an even playing field with Judaism and Islam. And there was another problem with “Nathan” for the church. Lessing’s one true villain is a church leader in 12th-century Jerusalem who decrees that Nathan should be burned at the stake for having raised a baptized girl, Rachel, as a Jew.

“Nathan the Wise” opened Wednesday at the Classic Stage Company, and the marvel of Lessing’s play is that there’s nothing epic about it. The complex confluence of the three religions is handled with a minimum of characters. In addition to Nathan (F. Murray Abraham), there’s a Kurdish leader (Austin Durant) and his sister (Shiva Kalaiselvan), and for the play’s Christian, a young German knight-crusader (Stark Sands) hunts Jews until he finds himself falling in love with one — or so he thinks.

Lessing wrote “Nathan the Wise” in blank verse (translated into English by Edward Kemp), and comparisons to some of Shakespeare’s comedies are immediately apparent, but fleeting. Even before Rachel (Erin Neufer) is told her true parentage — the knight, too, is in for a big surprise — Lessing might be seen as the inspiration for a W.S. Gilbert libretto.

As directed by Brian Kulick, this “Nathan” might be better enjoyed on a second viewing. In the play’s first act, many of the performances seem overbroad, as if the actors had stepped out of “L’Italiana in Algeri.” That approach makes sense by the time we get to the genuinely madcap conclusion, but much less so at the very beginning when the audience is confronted with set designer Tony Straiges’ huge photo panorama of a very contemporary war-torn Middle Eastern city.

The exceptions to the broad-is-better route are Abraham and John Christopher Jones in the small but crucial role of the monk. They’re wry without being over the top, amusing without being buffo.