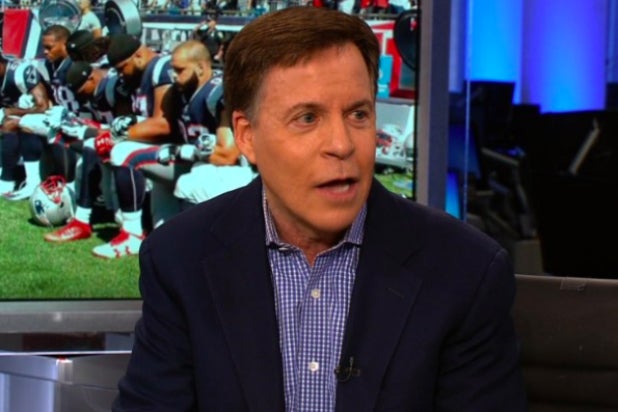 Bob Costas is about to unite an entire country. (OK, probably not.)

The NBC Sports personality has a whole new idea on how players can handle the national anthem this Sunday — but first, he got an obligatory conceit out of the way: “This is a humble suggestion on my part, because who am I, a very fortunate white man, to tell primarily African-American citizens what they should do?” Costas said Saturday on CNN.

“The idea of linking protests, no matter how legitimate the issue you are protesting, directly to the National Anthem is not just offensive to the love-it-or-leave-it crowd — it actually causes ambivalent feelings, at best, among many people who are sympathetic to the issue but see the anthem as representing a lot of different things, including the country’s ideals and aspirations,” he continued. “So to me, perhaps the most effective thing to do would be to stand for the national anthem, but the second the last note is struck, take a knee.”

Makes sense as a compromise, we suppose — it’s kind of a reverse version of what Jerry Jones and the Dallas Cowboys did on “Monday Night Football” this week. And the television cameras will stick around until the tail-end of the “Star-Spangled Banner” these days, anyway — something sports commentators like Costas are still getting used to.

“Most of the time, unless it’s the Super Bowl or World Series and you want to see the singer, they’re in commercial during the anthem,” he said. “Now, you’re going to see it.”

Watch Costas’ CNN spot here, and let us know in the comments section what you think of the proposal.

This idea is different from the former face of the Olympics’ previous society-saving idea.

“I would have the P.A. guy say, ‘Please stand for our national anthem and in recognition of the ideals it represents,'” Costas said to Bill Maher last week. “That would then encompass conservatives, liberals and everyone in between. I think that would make it more palatable.”