The network has announced a new documentary focusing on the discovery and exploration of the Arctic explorer’s long-lost vessel, which sank in 1915, set to premiere this fall. The ship was inaccessible until last month, when an ice-breaker-led exploration launched off the coast of Antarctica with a team of scientists, archaeologists and extreme-environment filmmakers who documented the discovery in real-time. 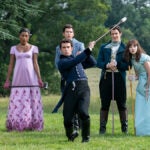 National Geographic is producing the doc in partnership with SVOD content platform History Hit, digital content agency Little Dot, production company Consequential and ABC News. It will air this fall as part of National Geographic’s “Explorer” series and on Disney+.

“Through bold exploration and storytelling, National Geographic has taken generations of loyal fans from the deepest depths of the ocean to the peak of Mount Everest, enabling them to see and engage with the world in entirely new ways,” Courteney Monroe, president of content at National Geographic, said in a statement. “The search for Sir Ernest Shackleton’s lost ship Endurane could not be a more perfect story to continue this proud legacy.”

National Geographic has the exclusive rights to long-form documentary detailing the discovery.

It took the crew 10 days of navigating treacherous terrain and icy waters to reach the search area. They found Endurance at a depth of over 3,000 feet in the Weddell Sea. Using submersibles with 4K cameras and lighting arrays, they found a well-preserved wreck, and are still on-site recording and documenting their findings.

The famous wreck — in great shape because of the lack of wood-eating microbes in the icy waters there — will remain untouched, and no artifacts will be retrieved. Explorers say the results of the discovery will provide significant insights into Shackleton’s Imperial Trans-Antarctic expedition that launched in 1914 and is one of the greatest stories of human survival ever told.

Endurance carried Shackleton and 27 other men with the goal of reaching the South Pole and crossing the continent overland. But as they neared, the ship was trapped in ice, and the crew spent the winter in the frozen landscape. When it sank 10 months later, the some of the crew sought rescue on foot and in lifeboats, returning to find everyone still alive.