The police boycott of Quentin Tarantino‘s “The Hateful Eight” has received the endorsement of the National Association of Police Organizations — a group representing 1,000 police units and associations and over 241,000 sworn law enforcement officers.

Not only does the organization support the protesting unions — which has spread to including cops in New York City, Los Angeles, Houston, New Jersey, Chicago and Philadelphia — it is discouraging police officers from engaging in promotional efforts and any future productions that routinely need the assistance of law enforcement, even for off-duty work.

“We ask officers to stop working special assignments or off-duty jobs, such as providing security, traffic control or technical advice for any of Tarantino’s projects,” a statement on NAPO’s website said.

It’s a common practice for “off duty” officers to provide security and traffic assistance during high-profile events like movie premieres and for the duration of shooting, particularly on locations outside studio lots.

Reps for the director and his “Hateful Eight” distributor, The Weinstein Company, did not return TheWrap’s request for comment. The Western starring Samuel L. Jackson and Kurt Russell is scheduled to hit theaters on Christmas Day in limited release.

These escalating protests sparked after Tarantino attended a rally against police brutality in Manhattan last weekend, in which he railed against “murderers” with badges.

The rally took place just four days after NYPD officer Randolph Holder was shot in the head and killed while pursuing a suspect in East Harlem.

Since the rally, Tarantino has not made any public comment. “He was doing what’s called ‘watchful waiting,'” veteran crisis expert Howard Bragman told TheWrap. “It goes away, or it gets worse. After Philadelphia joined the protest, it certainly didn’t go away.”

In fact, the boycotts seem to be gathering steam as more groups come forward. “The other unions joined New York as a show of support, and they’re taking their lead. I’d imagine they’re looking for an apology,” a law enforcement insider told TheWrap on the condition of anonymity.

Bragman added the the protests could snowball beyond police groups. “This can spread to other unions like firemen and teachers too,” he warned.

“There are no words to describe the contempt I have for him and his comments at this particular time,” New York City Police Commissioner Bratton said Tuesday. New York police union president Patrick Lynch added, “New Yorkers need to send a message to this purveyor of degeneracy.”

Just days after NYPD Officer Randolph Holder was killed in the line of duty, film director Quentin Tarantino bluntly referred to police as “murderers” during an anti-police rally in New York City this past weekend. As a high-profile figure, Tarantino’s language is utterly irresponsible, particularly at a time when the nation is seeing increasing and persistent calls for the killing of officers. Anti-police rhetoric like Tarantino’s threatens the safety of police and citizens alike.
The police he are calling murderers are the same officers who were present along the protest route to ensure the safety of protesters, who provide security when he is filming, and who put their lives on the line to protect our communities day in and day out.

The National Association of Police Organizations staunchly supports the call of the New York City Patrolmen’s Benevolent Association and the Los Angeles Police Protective League to boycott Tarantino’s films. Furthermore, we ask officers to stop working special assignments or off-duty jobs, such as providing security, traffic control or technical advice for any of Tarantino’s projects. We need to send a loud and clear message that such hateful rhetoric against police officers is unacceptable! 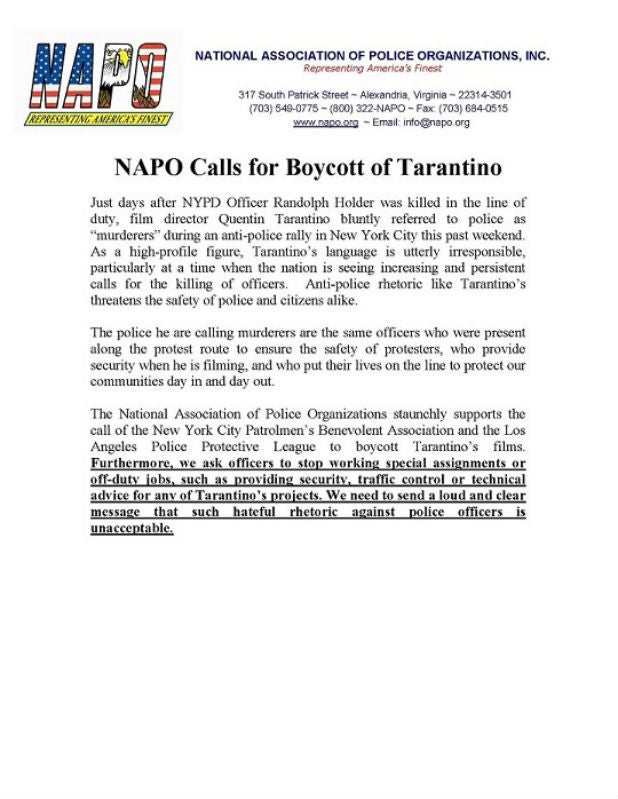 Amid nationwide police boycotts of ”The Hateful Eight“ sparked by the filmmaker’s decision to speak out against police brutality, TheWrap remembers other times Tarantino’s mouth got as much attention as his movies.