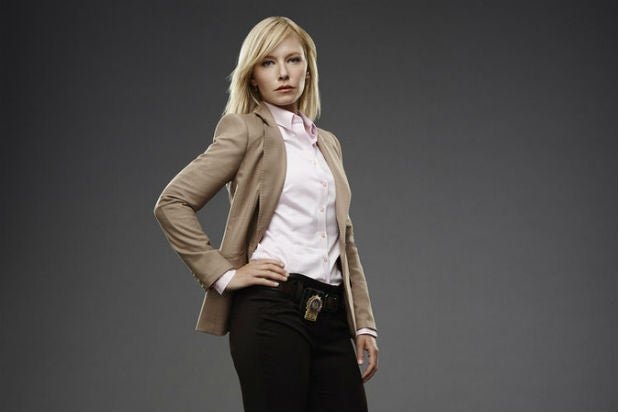 Kelli Giddish returns to NBC’s “Law & Order: SVU” on Wednesday, her first appearance back on the show since wrapping up her rape storyline. Going into her fourth year playing the jaded detective, the storyline is earning the actress some Emmy buzz.

“I’m so happy. I’m glad that people responded to the episode,” Giddish, 34, told TheWrap of the awards chatter. “The writing was so damn good on this episode. I really connected with it.”

The detective returns to the series Wednesday after confronting a former superior who raped her five years prior and was repeating the pattern with another female cop. Together, the women force their attacker into resigning from the force.

“Is she going to start going therapy and become a hippie chick? No,” Giddish laughed of the storyline’s fallout. “Maybe she’s more capable? More prepared to deal, to get more entrenched with cases and really have an alliance with [Det. Olivia] Benson?”

Giddish added, “She’s gained some power by letting herself, for what she saw as weak, to say what happened to her. It’s not a weakness and maybe, she’ll learn from it.”

While Rollins was hardened and destructive as a result of not being open, Giddish says her character wouldn’t have found closure if she hadn’t spoken up.

“There comes a point where your own safety and own piece of mind, what you think you have is not nearly as important as stopping this sleazeball,” she said. “When she finally sees the guy go down, there is a relief.”

On the show, Rollins’ colleagues rally around her. And that becomes part of what Giddish takes away from the event.

“This happens so often to women. Showing one face to work, especially if you’re a police officer and you’re dealing with sexual abuse every single day, could you imagine? I try to put myself in her shoes,” she said.  “When you let [secrets] out, it’s so much better. There’s people around you to help, and lift you up.”