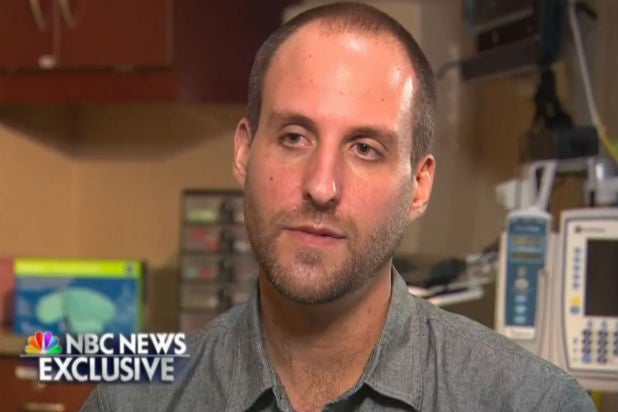 One day after being told that is he free of the Ebola virus, NBC News cameraman Ashoka Mukpo is back on the network.

The freelance cameraman did a sit-down interview with Kate Snow on “NBC Nightly News with Brian Williams” on Wednesday, speaking out about his ordeal for the first time and revealing that how he contracted the virus is still a mystery.

“There’s a lot of rough moments in this thing,” Mukpo continued. “But for me, personally, I am just so fortunate to be alive. And every breath I take, every step I take, is just a reminder of how valuable and precious life is … how important it is to make good use of it. I think in the future I’ll be much more delicate about the risks that I take.”

As TheWrap previously reported, a blood test performed Tuesday by the U.S. Centers for Disease Control and Prevention showed that the 33-year-old no longer has the virus in his bloodstream and he is free to head home to Rhode Island.

Several Americans are currently being treated for Ebola, which has so far claimed over 4,800 lives in West Africa along with Eric Duncan on American soil, and the cameraman says his own survival has sparked a heavy feeling. “I don’t know if guilt is the right word. But it — it just feels like something isn’t right about that.”

Mukpo was part of a news crew supporting the network’s chief medical correspondent Dr. Nancy Snyderman while on assignment in Liberia when he contracted Ebola. Snyderman and her crew were put on a voluntary 21 day quarantine. However, she sparked controversy by violating the advisory, causing it to be upgraded to mandatory.

Mukpo began showing symptoms on Oct. 1 and immediately quarantined himself and sought medical advice. He was taken to the Medicins Sans Frontierese (MSF) treatment center where he tested positive for the virus. He was then transported to the Nebraska Medical Center’s biocontainment unit for treatment.

He went on to tell Snow that while he is on the road to recovery, “There’s definitely some physical effects of this that I think are gonna last a while. But I can feel my strength coming back every day.

“There was a period of time that I was quite sick. And, you know, I was laying in a hospital bed and had no strength. Had various pains. And — and just all kinds of fun stuff going on in my body.”

Explaining that how he contracted the disease is “the million dollar question. … There’s not a satisfactory answer for it.” Mukpo said he doesn’t regret going to Liberia to cover the health crisis. “As a journalist, and as somebody who had a relationship to that country, it’s not something that I will look back on and say, you know, it was the wrong decision to do,” he said.

“It’s important in life to take risks for things that you believe in. But it’s also important to keep yourself safe. So, I mean, it’s hard to call Ebola a learning experience. But I think that I’m gonna walk away from this with some important lessons for the future.”

Watch the video from the “NBC Nightly News” interview below.