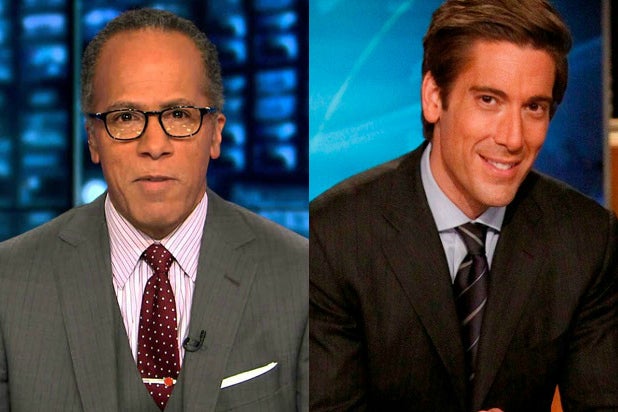 Well, technically it did — at least by current Nielsen rules. But the 6:30 p.m. newscast apparently didn’t do it alone — the final numbers enjoyed a boost in certain markets thanks to an early morning re-air that took place in somewhere between 10 and 30 cities, depending on who you ask. Re-airings count in final Nielsen Live Same Day numbers until 6 a.m. local time.

While NBC News will tout the rerun as a totally fair strategy meant to reach those available at different hours, which is technically true per the rules laid out by Nielsen, ABC News — which doesn’t utilize the same method — must be none too pleased.

And the timing of the maneuver seemingly to Brian Williams‘ suspension certainly doesn’t make it look any less skeptical. NBC News previously used that early morning timeslot on Gannett stations (Gannett owns a lot of NBC affiliates) for “Today” show reruns, one industry insider told TheWrap. The insider added that Nielsen will not break out the early hours local broadcast data (which vary between 2 a.m.-4 a.m.) due to “proprietary” reasons.

Nielsen declined TheWrap’s request to participate in this story. Gannett declined to comment.

The insider also estimated that the difference would be well above the 11,000 total viewer gap number — perhaps more like 70,000 extra audience members in the apples-to-oranges comparison.

For its part, NBC said the move to re-air “Nightly” has been in the works for a little longer than its critics would have you believe.

An NBC News spokesperson told TheWrap, “Like any forward-looking media organization, we have been focused on ways to reach our audience when and how they want to be reached. Over the last year we have launched NBC Nightly News on VOD and Sirius XM and we have made the broadcast available at later airings in some markets. We believed there would be an appetite for NBC Nightly News in addition to its regular timeslot, and that has proven to be true: the viewer response has been overwhelmingly positive.”

The two news networks compile weekly ratings press releases, which are distributed to the media and reported on Tuesdays. Per the most recent ones, “Nightly” topped “World News” 8.131 million total viewers to 8.120 million. Neither NBC’s nor ABC’s releases specified how many airings occurred between the regular 6:30 p.m. broadcast and the 6 a.m. cutoff.

ABC News stated at the time that this 11,000 total viewer gap represented the “closest overall viewer performance in more than five-and-a-half years.

Both nets agreed that ABC News won the advertiser-sought 25-54 demographic.