Did you happen to catch the season premiere of NBC’s “Saturday Night Live” a few weeks ago?

The show’s “cold open” was a spoof of “Monday Night Football,” with guest host Miles Teller impersonating NFL analyst Peyton Manning and “SNL” writer and feature player Andrew Dismukes imitating his brother Eli. Except instead of talking sports, the two focused their running commentary on “SNL” itself, ripping apart a separate skit-within-a-skit, shown in split screen, in which other cast members bumbled around the stage as Donald Trump and his minions at Mar-a-Lago during Hurricane Ian.

“Let’s take a look at the stats so far,” Teller quipped a few minutes into the program. “Fourteen attempted jokes, only one mild laugh and three chuckles.”

“I hear they stayed up till 5 a.m. writing this show,” Dismukes chimed in.

“What time did they start writing? 4:30?” cracked Teller. 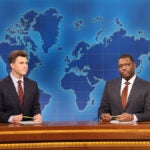 The parody was clearly intended as an archly self-referential bit of meta schtick. But what that three-chuckle sketch actually revealed to the audience — if that’s what one can even call the thinning crowd of stragglers still tuning into the show — is that “SNL” has become so unfunny over the years, even its writers and performers know how lame it is.

I hate to be the one to point this out, because “SNL” has meant so much to so many viewers over so many decades — or at least given generations of teenagers a reason to feel slightly less crappy about being stuck home on a Saturday night. But clearly the time has come to put this creaking relic, now in its 48th season, out of its all-too-prolonged misery.

I understand that this is supposed to be a “transition year,” as “SNL’s” 77-year-old creator and producer Lorne Michaels insists on calling it. Pete Davidson, Kate McKinnon and Aidy Bryant left the program at the end of last season, along with nearly a half-dozen other regulars who bolted Studio 8H over the course of 2022. It’s been, in fact, the biggest cast turnover since the great exodus of 1995, when Adam Sandler, Mike Myers and Chris Farley all skedaddled from the show. And while it’s at least theoretically possible that this newest crew of “Not Ready for Prime Time Players” — Molly Kearney, Michael Longfellow, Devon Walker and Marcello Hernandez — might turn out to be the second coming of John Belushi and Gilda Radner, so far this season they haven’t even ascended to Gilbert Gottfried levels of comedy.

To be fair, “SNL’s” mediocrity isn’t entirely the new cast’s fault. It’s not like the show was killing it with the cast that came before them, or, for that matter, the cast before that. The program’s audience has been shrinking for decades: This season’s premiere pulled in only four million viewers, making it the least-watched in the series’ history. While “SNL’s” ratings remain relatively strong — it’s No. 4 among the top 50 live broadcasts among the 18-49 demo — it’s still attracting just a third of the viewership it was drawing back in the 1990s. Granted, nobody today is watching broadcast TV the way they did 30 years ago, but that’s sort of the point. Why is NBC clinging to a show that peaked during the Clinton administration?

But let’s be honest — even back in the 1990s, “SNL” wasn’t always all that great. To be even more honest, the show was never all that great, even during its early golden age in the 1970s. For sure, there were many moments of inspired comic brilliance (Belushi’s Samurai deli, Dan Aykroyd’s Julia Child impersonation, Bill Murray’s smarmy lounge singer crooning the “Star Wars” theme). But watch those ancient episodes on Peacock today and you can’t help but wonder what the fuss was all about, particularly when it comes to Chevy Chase. Even back then, in those very first Weekend Updates, he came across as insufferably smug.

What was extraordinary about “SNL” when it first arrived on the airwaves, however, was how new and fresh it seemed. Television in the 1970s was mostly a vanilla wasteland filled with pablum like “Starsky & Hutch,” “The Six Million Dollar Man” and “The Love Boat.” Even the best of it — “The Bob Newhart Show,” “The Rockford Files,” “The Odd Couple” — was pretty traditional fare following straight-forward formulas.

But “SNL,” which, in 1975 burst onto the scene like a pop cultural uprising, was a wholly original revelation. It was filled with rock n’ roll (it’s where Simon and Garfunkel reunited in 1975), political humor (Chase’s impersonation of Gerald Ford, which mostly involved slapstick pratfalls, likely helped elect Jimmy Carter in 1976), and irreverent spoofs of TV itself. Even TV commercials — the very hand that feeds broadcasting — were fair game for parody on this bonkers new show.

“SNL” in those early years felt rebellious and subversive, even when its jokes fell flat, which they frequently did. It was as if the inmates had taken over the asylum. Only these inmates had all escaped from institutions with names like “The National Lampoon” and Second City. And the fact that it was all broadcast over the high-wire act of live television made it even more crazily exhilarating.

Over the decades, “SNL” has sometimes managed to recapture that original iconoclastic energy, or at least put its snarky imprint on major cultural moments. Tina Fey’s “I can see Russia from my house” gag pretty much nailed Sarah Palin (who appeared on the show opposite Fey, anyway, right before the 2008 election, proving just how reckless a politician she actually is). Kate McKinnon sitting down at a piano to sing Leonard Cohen’s “Hallelujah” was exactly the right note for the show to strike after Donald Trump’s election in 2016 (no matter what one-time cast member Rob Schneider has to say about it).

Still, television today isn’t a particularly hospitable environment for rebellious skit comedy. For one thing, the rebels took over the medium a long time ago, with shows like “The Simpsons,” “Seinfeld” and “South Park” upending what was left of TV’s norms after “SNL” opened the gates. These days, iconoclasm is the new establishment.

For another, rebellion is for kids, and in 2022, young people aren’t staying home on Saturday nights to tune in to the National Broadcasting Company on some antique cathode-ray-tube contraption in their parents’ living rooms — not even when Lorne Michaels invites a teen magnet like 67-year-old Irish actor Brendan Gleeson on the show as guest host (see the Oct. 8 episode; actually don’t, it’s a disaster). They’re not watching TV at all; they’re glued to their phones. To the degree they’re even aware of “SNL,” it’s likely because they’ve seen clips of it uploaded to TikTok or YouTube.

Don’t get me wrong: I’m grateful to NBC for giving Belushi and Aykroyd and all the rest 90-minutes of weekly late-night airtime all those years ago. I’m glad I live in a pop cultural universe in which “Saturday Night Live” played such a huge role. I’m just saying it’s finally time to gather up the cast on that iconic stage, fire up that Howard Shore closing theme song, and at long last, say goodnight. 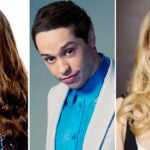 Also Read:
‘SNL’ Demand Will Take a Hit After Cast Exodus – But Here’s How It Can Bounce Back | Charts