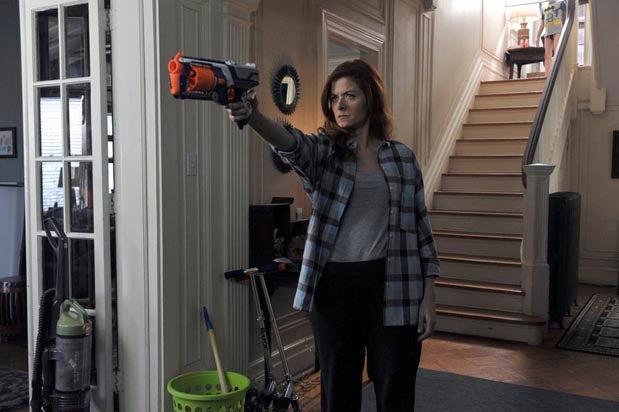 Don’t tell anyone, but I actually enjoyed the first episode of “The Mysteries of Laura,” and am cautiously optimistic about its survival prospects.

Sure, some of the jokes could be groan inducing, and the plotting broad in the extreme, but the same was true of “The Millers” last fall, and that critically-derided comedy managed to make it to Season 2.

The first episode of “The Mysteries of Laura” moved at a nice breezy pace and there was promising interplay between stars Debra Messing and Josh Lucas as estranged NYPD homicide cops with mischievous twin sons. I find it baffling that a critic called it the worst show of the fledgling fall TV season, and others dinged it for not being realistic enough. Um, since when do we demand that of our sitcoms? The “Friends” characters could never have afforded to live in their apartments, to use one frequently cited example, and the list goes on from there.

Part of the disconnect may be rooted in the fact that NBC’s new show is a sitcom-procedural hybrid based on a Spanish telenovela. Messing’s Laura Diamond verges on cartoonish at times, and so does the show, much like “Ugly Betty,” another telenovela adaptation. Viewers that desire more authenticity in their cop shows have plenty of straight-forward procedurals to choose from, including “Law & Order: SVU,” which follows “The Mysteries of Laura” in its regular 8 p.m. Wednesday timeslot.

The show’s sneak preview after “America’s Got Talent” last week got solid ratings, but the real test will come when it competes against ABC’s family-friendly comedy block of “The Middle” and “The Goldbergs,” plus reality stalwarts “Survivor” and “Hell’s Kitchen.” Will it maintain the same breezy tone of the pilot — or will it descend into “Smash” level camp or worse? At this point, it could tip in either direction.

The show is exec produced by “Boston Legal” vet Jeff Rake and McG, who directed the pilot episode, with “Brothers & Sisters” producer Greg Berlanti also on board as exec producer; all know their way around television programming.

The first episode revolved around a murder of a wealthy tech exec in his Westchester County mansion, and Laura’s attempt to get her rowdy children placed into another preschool program. We learn Messing’s Laura is not your everyday gal from the moment we see her trash-strewn car, and soon watch her coolly shoot the ear off a bad guy and wipe blood splatter off a hostage with a baby wipe.

Predictably she gets flack from a by-the-book coworker (Janina Gavankar), but her boss (Enrico Colantoni) backs her up. In short order we get a scene establishing how out of control her kids are, and her strained relationship with Jake Broderick (Lucas), her philandering husband. There’s definitely unfinished business between the couple, which by all indicators will be mined in future episodes.

And assistant Max (Max Jenkins) has the potential to become a break out character. His scenes with Messing’s Laura are among the strongest in the first episode.

“Your OCD is insane,” he tells his boss as she has him run license plates in hopes of finding a teacher with an exploitable past. Sure enough, she does, causing him to exclaim, “Laura, you ginger goddess, you hit the mother lode.”

The show also borrows some “24” style split screens as various witnesses to a murder are interviewed.

Alas, some of the dialogue is extremely problematic, and the jokes tired: An Asian surname is played for laughs in the pilot and a stuffy administrator called a snobbish Nazi when she raises her eyebrows at the rambunctious kids and the couple’s parenting.

And even though Laura is confidently doing a job some might not consider women’s work, she can’t help but utter her own sexist remarks.

“Men are messy — most leave messes behind,” she tells her partner Billy (Laz Alonso), who sure enough has spilled his snack on the table.

Regrettable dialogue like that pops up frequently, but the action keeps moving, and there are enough glimmers of freshness to keep the show entertaining and warrant another viewing. The second episode (not available for preview) centers on the investigation of an online dating murder and preview clips show Messing’s Laura visiting a lingerie shop and causing a scene. In another Laura tells Jake, now her boss, that he can’t act like a jealous husband anymore.

The network is billing the day’s lineup as WCW: Woman Crushing Wednesday, playing up the fact that female cops have keys roles in “The Mysteries of Laura,” “Law & Order: SVU” and new series “Chicago P.D.” Whether Messing will be able to crush it like Mariska Hargitay, long-time star of “SVU,” definitely remains to be seen.

“Mysteries of Laura” premieres in its regular timeslot at 8 p.m. ET on Wednesday.