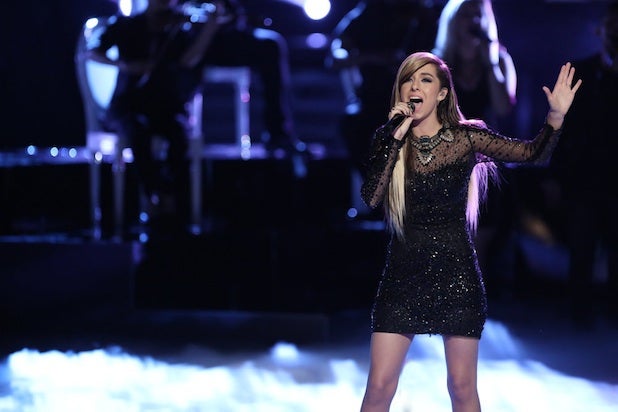 Well folks, after weeks of Blinds, Battles, Battles, more Battles and seemingly endless Instant Saves, we’ve finally arrived. This week gave us three coaches, three contestants and too many duets to count! Now let’s down a couple of energy drinks and chat final performances on NBC’s “The Voice.”

1. Coach wardrobe.
Adam Levine is going to a “Grease” sing-along. Shakira is wearing a shirt similar to one my mom wore in the ’80’s in Rio (it was her “fancy shirt”). Usher is dressed like he’s about to watch “The Voice” from home, and Blake Shelton is wearing his version of a country tuxedo.

2. Déjà vu
Each finalist was asked to revisit a previous song from earlier in the season (chosen by America). Team Adam’s Christina Grimmie performed a more aggressive version of her blind audition song, “Wrecking Ball,” against the backdrop of a light up spider web. Team Usher’s Josh Kaufman did a spirited rendition of the battle selection that effectively changed his trajectory (and team), “Signed, Sealed, Delivered,” and Team Blake’s Jake Worthington delivered a subdued rendition of his blind audition song, “Don’t Close Your Eyes,” with his heart on his sleeve and a guitar in hand. These retreads are always tricky, because it’s a little “been there, done that,” but I’d have to give this round to Josh for making what was previously a duet a pretty hot solo.

3. Mixed messages
I love the song “Every Breath You Take,” and Usher and Josh Kaufman both sounded great on it, but it was kind of a creepy, confusing choice for a duet. I get what Usher was trying to say in terms of message. He’s going to keep his eye on Josh and continue helping him whatever the outcome, but I don’t know that awkwardly stalking each other around the stage to the strains of a stalker-y song was the best vehicle for that message.

4. Awkward Product Placement: Round 2
Because NBC can’t resist using “The Voice” to promote other NBC products, the guys from “Last Comic Standing” came by, and a man in a white suit (the host?) screamed “Breathe! Breathe! Breathe!” into the mic like he was having a comic seizure.

5. Party in the skybox
Y’all, the Sprint Skybox has been a fairly desolate, lonely place this season, with only occasional visits from Carson to coin terrible words like “framily.” However, this week it hosted a short party with contestants that yielded some genuinely funny stories. We learned that meeting Miranda Lambert is “every redneck’s dream” via Jake Worthington. We also learned that Josh Kaufman’s son thought he was hanging out at Target for the first three weeks of his Voice-incarceration. Aw, memories – sponsored by Sprint.

6. Bad Medicine
You guys, I love Shakira. I love Blake. However, the two of them together performing “Medicine?” Sometimes two rights make a wrong.

7. When coach/contestant duets go right
Adam and Christina’s low-key rendition of “Somebody That I Used to Know” was one of the better moments this week. I think deep down, Adam fantasizes that both he and Christina are a little more avant-garde than they actually are (maybe he’s missing Melanie Martinez??), so I was concerned when they announced this song choice. However, the rehearsals were hilarious, and the end result was quite good with Christina taking the wheel and letting Adam sit in the backseat for a change.

8. Plundering the ’80’s songbook
For his competition song, Jake Worthington performed another ’80’s ballad (in an attempt to recapture the success of last week’s “Heaven”). “Right Here Waiting For You” wasn’t his best vocal to date, but he emoted the crap out of it, giving a surprisingly mature and moving performance for someone whose cheeks I want to consistently squeeze. Our little Jake is growing up fast, y’all.

9. Take it off!
Adam and Usher sounded fantastic on “Untitled (How does it feel),” but did anyone else find this song a little uncomfortable as a duet? It was oddly disconnected with Adam planted behind the mic while Usher worked his way around the audience doing gentle pelvic thrusts. Also, the song just kept going and going, and no one took his shirt off. Boo! Give the people what they want, producers!

11. The Jake and Blake Show takes a bow…
Man, I’m gonna miss these the “Jake and Blake” show. Their “Country Boys Can Survive” didn’t reinvent the wheel, but it was cute and completely appropriate. Plus, their pre-performance banter reminded me why I’m rooting for these two crazy kids to make it!

12. I can’t help doing melismas…
I think Christina Grimmie is an insanely talented singer who has a crazy vocal range, but I can’t get behind taking a classic song like “Can’t Help Falling in Love” and adding enough melismas and runs to make the melody almost unrecognizable. Christina’s vocal technique was incredible, and she put her own stamp on it (no doubt), but sometimes I just want to hear people sing a beautiful song rather than do acrobatics around it. Just because you CAN doesn’t mean you SHOULD, you know? That being said, it was an amazing vocal feat, and it may have been enough win her the whole competition.

13. Fire!
“Set Fire to the Rain” seemed like an odd choice for Josh Kaufman’s competition song, but he somehow managed to beat it into submission via an intensely charismatic performance and lots of FIRE! Seriously, there was fire all over the place, and Josh was on his knees in white begging, and the violinists were furiously begging via their violins, and it was kind of epic. Was it the best fit vocally? No. Was it maybe a little advised? Maybe, but I don’t even care, because FIRE!

14. iTunes snafus
At the end of the night, “Set Fire to the Rain” wasn’t showing up as a single in iTunes (only as an album) – a seemingly minor thing that could actually put Josh at a real disadvantage in terms of voting. Will the show discard all the iTunes votes out of fairness? We will see. After last week’s controversial Instant Save, here’s hoping producers do the right thing and restore everyone’s belief in the voting system.

Who is your favorite to win? Who surprised you this week (for better or for worse)? Leave your thoughts in the comments, and thank you for joining me once a week to talk season 6 of “The Voice”!

Don’t forget to check out my album “In & Out of the Dark,” available on iTunes NOW. For more updates, follow me on Twitter: @katrinapmusic and visit my website, www.katrinaparker.com.