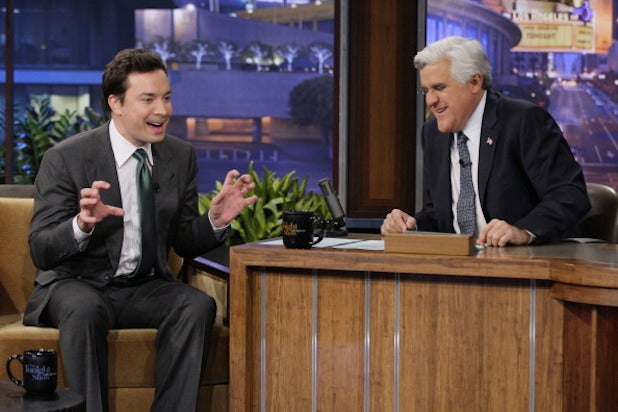 NBCUniversal plans to lay off the entire “Tonight Show” staff — all 164 Burbank employees — when the late-night talk show moves from California to New York City next month, TheWrap has learned.

NBCUniversal notified the California Employment Development Department last month that it will eliminate the positions, a company spokesperson told TheWrap. Layoffs will begin on Feb. 14 and be staggered through April 4.

“We have encouraged those 164 employees to take a look at jobs throughout the company and apply for them,” the spokesperson told TheWrap. Those available positions include jobs at “The Tonight Show Starring Jimmy Fallon” in New York City.

Jay Leno is set to depart “The Tonight Show” on Feb. 6, when his final guest will be Billy Crystal — who was also his first ever guest on the Los Angeles-based program, 22 years ago. Fallon takes over the show on Feb. 17, when his first guests will be Will Smith and U2.

The Burbank Leader first reported the layoffs. Job loss had been expected with the show’s move to the East Coast.

“The Tonight Show” underwent a smaller round of layoffs in 2012, when Leno took a pay cut to preserve jobs.