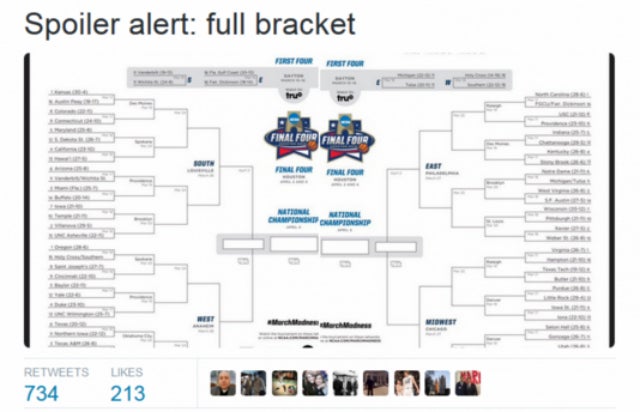 CBS took its sweet time unveiling the 2016 NCAA Tournament bracket on Sunday night. Unfortunately for the network, Twitter did not.

Somebody leaked the entire field and seedings just 25 minutes into the network’s big reveal special. CBS, on the other hand, took 120 minutes to officially share the same thing.

As one might expect, that makes for an unhappy NCAA and probably a pretty peeved CBS Sports.

“We go through great lengths to prevent the tournament field from being revealed early and the NCAA took its usual measures to protect this from happening,” the NCAA said in a statement. “Unfortunately, and regrettably, the bracket was revealed prior to our broadcast partners having the opportunity to finish unveiling it. We take this matter seriously and are looking into it.”

To make matters worse, this was the first time that CBS extended its hour-long special to two hours. Ouch. A CBS Sports spokesperson had no comment when we reached out.

If you’re lazy or unoriginal and plan to pick chalk this March, the four No. 1 seeds are: Kansas, Oregon, UNC, and Virginia.

Good luck to all, especially to CBS for the special’s TV ratings.