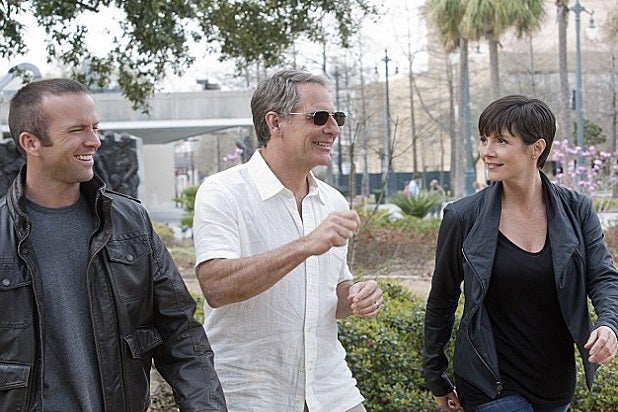 CBS has gone marching in to New Orleans with the latest installment of its “NCIS” franchise, titled, appropriately enough, “NCIS: New Orleans.”

The newest incarnation of the mighty “NCIS” franchise — premiering Tuesday at 9 p.m. — stars “Quantum Leap” and “Behind the Candelabra” star Scott Bakula as Special Agent Pride, who heads up the New Orleans office of NCIS. The series also stars Lucas Black, Zoe McLellan and C.C.H. Pounder.

TheWrap spoke to executive producer Jeff Lieber about, among other things, staying true to the tragedy and scandal-afflicted New Orleans while also creating a riveting crime drama. Read on for our discussion.

TheWrap: What made New Orleans a good setting for a new “NCIS” spinoff?
Jeffrey Lieber: There are very few cities in America that come with their own culture baked in, whereby  you go there and every corner you turn in, there’s a story to tell. The minute we came down here and started shooting, it was amazing how the city has become a character in the show. And the crew here, like all New Orleanians I find, is so protective of the city and the image. There’s a big run in the first episode about where Brody’s going to live. I spent much time talking to the locals here about what does this neighborhood mean, and we’ve expanded that with each passing episode to try to really build in the soul of the city.

A big part of the first episode is about political corruption, and obviously it’s a crime show. Were the locals wary at all of the show presenting New Orleans as a place where there’s this big crime every week and the government is corrupt?
The politics being corrupt, it’s one guy. We wanted to find a nemesis and he doesn’t show up again for a while. But that’s no different from any other city we’d go to. Had we been in Chicago, had we been in Salt Lake City, that character would still exist for us. I’m from Chicago and I think the last four governors there are in jail. So it’s less a statement about New Orleans, and more a statement about how that character works. Same with crime; in any crime show, that’s the basis of what you’re doing. We’re not trying to indicate in some way that New Orleans is more crime-ridden or less crime-ridden. If we were doing a dating show, we’d have a date of the week. This just happens to be the milieu we’re in.

Have you had discussions locally about how the city will be portrayed?
We’ve been in a constant discussion both about how the city’s portrayed, the recent history of the politics here — all of that stuff has been in discussion. There are several lines in there, like [when corrupt city councilman Douglas Hamilton tells Scott Bakula‘s Special Agent Pride], “You get along with everybody else on the council but me,” so we really were trying to focus less on a conceptual model of New Orleans as being in any way more or less corript than anywhere else, and more about this one character.

How did Scott Bakula come aboard, and what makes him right for the role of Pride?
Scott came aboard last year in two planted episodes, and there was a real commitment to find somebody who, the moment you saw him, people feel comfortable with. There are  people who are TV stars, and he’s one of them. I think he was really interested in being able to portray this one guy who’s based on an actual former agent for NCIS, and also, again, to come down here and be in this world was really important to him as well.

What about the New Orleans accent? What’s the secret to a) nailing it, and b) making it intelligible for a wide audience?
You know, it’s one of those things where you get more and more comfortable with it as the weeks go on. It’s very hard, right off the bat, to be thrown into something and be like, “here.” I think [Bakula] is really going for something that is culturally consistent without being … again, like the city, the locals are very, very protective of the way things sound, and so we’re not trying to do anything drastic. I think we’re just trying to get the flavor of the region, and that’s about all. So it’s very light, and I find it very consistent as well. The character isn’t the accent, the accent isn’t the character. I think what was important though, like with everything else, was having enough flavor to say, “OK, we’re actually there.” Again, it’s endlessly useful to have him here — to have all of us here — sort of soaking it all in.

Obviously the “NCIS” franchise is incredibly thriving, but was there a concern at all about reaching a saturation point with another spinoff?
Well, this is network television, so there’s always a concern with anything you do. The show succeeds because people buy into the character, and the franchise itself is just a container for that character. So the goal was, in this case, to build these five people in a way that people would invest in them and take them on and then, over time, we’ll be able to continue to fill out the world. We’re now shooting episode five, starting episode six, so we’ve started to build in a group of people who are our people. We’ve got this confidential informant in a couple of episodes, we’ve got the guy Councilman Hamilton in a couple of episodes, we’ve brought in this other actor who we’re very excited about but probably can’t say his name. So we’re just sort of building our world. To answer your question, there is always a concern. If it’s a new show, the question is, will it catch on? If you do a spinoff, the question is, is there too much? What we try to do is not make this about “NCIS” and really try to invest in these five people.

How much crossover will there be between “NCIS” and “NCIS: New Orleans”?
There are two kinds of crossover. One, the worlds [between the two shows] are clearly connected. So we deal with a lot of the people they deal with, we deal in the same world. We’re trying to drop this into a world in which, if you flew an hour and a half east, you’d end up in Washington in the other show. Early on, we’ve got a couple different crossovers, and then that will sort of slowly fade into more of a world crossover, whereby we work under [Leon] Vance, we work with [Tobias] Fornell. The same sets of people that they deal with there, we deal with here. So it’s very much going to be a consistent world. In terms of the literal “NCIS” crossover, there’s a bunch early on — I’d say of the first six episodes, three of them will contain people from “NCIS.” It’ll taper off, partially because they’re in L.A., we’re here, but again, what we’re going for is that it’s very much the same worldview.