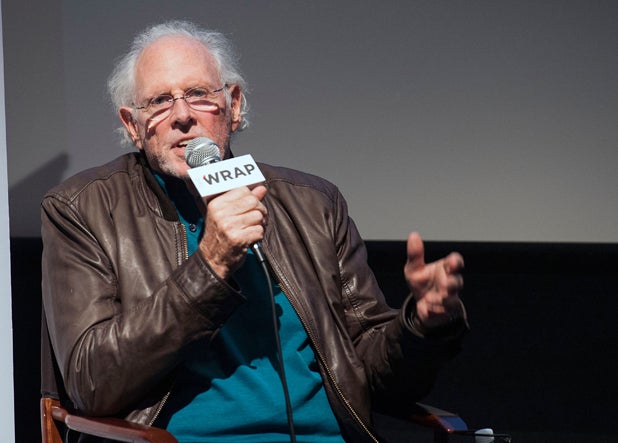 Bruce Dern plays a man of few words in Alexander Payne’s heartfelt comedy “Nebraska” but give him a microphone and the iconic actor gets chatty pretty quickly.

Dern entertained a rapt audience following the TheWrap screening at the Landmark on Thursday night with tales from the set of “Nebraska” as well as Hollywood’s golden age.

“I was given the material 10 years ago this week. I didn’t just want to be in it, I had to be in it,” said Dern. “I watched Alexander go off and make ‘Sideways’ and there was nothing for Brucey. Then he made ‘The Descendants’ and still no Brucey.”

Studios weren’t in a rush to finance a movie starring the 77-year-old actor, let alone one shot in black-and-white.

“I felt like I was never going to get an at-bat,” lamented Dern. “Then I got the call and it felt like it was the bottom of the 9th and we were down a run,” meaning it was finally Dern’s chance to step into the spotlight with the “game” on the line.

Dern stars as Woody Grant, an aging alcoholic who thinks he’s won $1 million after receiving a sweepstakes notice in the mail. He enlists his down-on-his-luck son David (Will Forte) to drive him from Billings, Mont., to Lincoln, Neb., so he can claim his prize.

Paramount Vantage brought the heartfelt comedy to Cannes, where Dern was left “shocked and startled” by the overwhelming response from the discerning crowd. “I just looked at Alexander who said, ‘and they’re French!'”

While Dern had kind words for “great teammates” such as June Squibb (Payne’s “About Schmidt”), who plays his foul-mouthed wife, and Rance Howard, Ron’s father who plays Dern’s brother, he singled out co-star Will Forte for special praise. “Will made his living with celery sticking out of his ass, but his sweetness and simplicity makes the movie. He’s the glue holding things together.”

“Saturday Night Live” veteran Forte was an interesting choice for the movie, and Dern told the crowd that the director spent weeks scouting faces at local bars. The director also cast a first-time actress in a climactic scene after seeing her at a shopping mall. When she asked, “Why me?” Payne said he wanted her in his movie because she was “kind of drab looking.”

The shoot wasn’t always easy for Dern, who struggled getting in and out of cars and climbing stairs. He also drove Forte nuts with his hearing aids.

Eventually, Dern regaled the audience with tales about Alfred Hitchcock, Elia Kazan and Marilyn Monroe, the latter of whom broke down sobbing on Dern’s shoulder when Greta Garbo failed to recognize her in Manhattan. Dern comforted the blonde bombshell, telling Monroe that Garbo was probably just shining her on. He imagined Garbo thinking: “They may call you Marilyn Monroe, but they call me Garbo! Stand in fuckin’ line!”

Speaking of practicing patience, Dern admitted that famed acting coach Lee Strasberg warned Dern that he wasn’t a conventional leading man, not that he should stop pursuing his dreams in Hollywood. “He told me to go out there and be yourself. For the first decade, you’re going to be the third cowboy from the right, but you’ll be the most interesting third cowboy from the right,” Dern recalled with a chuckle.

Dern’s patience paid off, with the actor parlaying his long career into the role of a lifetime. “Everyday with Alexander is special because you don’t know if you’re going to do something no one’s ever done before. He studies character behavior and lets you watch it. He’s 6-for-6 and he challenges you,” said Dern, who was grateful for his moment in the awards spotlight. “I’m an endurer and I got lucky here. The biggest win was to get the damn part!”