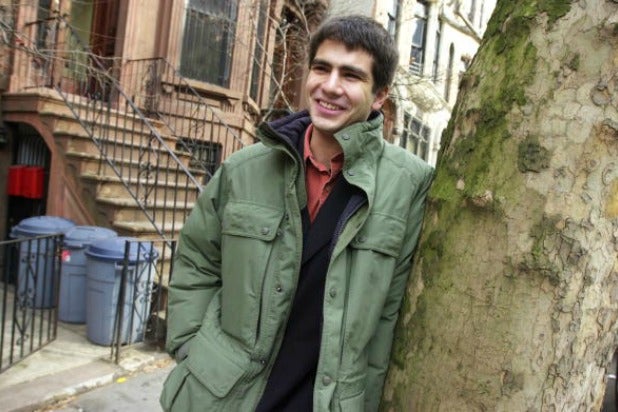 Ned Vizzini, whose novel “It’s Kind of a Funny Story” was adapted into a 2010 film starring Zach Galifianakis, has died at 32. His death was ruled a suicide, the New York Medical Examiner confirmed to TheWrap.

Vizzini (pictured above in 2002) also wrote for MTV’s “Teen Wolf” and worked on NBC’s upcoming “Believe.” A native New Yorker, he first rose to fame with stories based on his experiences at Stuyvesant High School. His first book, “Teen Angst? Naaah…: A Quasi-Autobiography,” was published when he was 19.

But Vizzini suffered for his success. He told the Village Voice in 2006 that he suffered a nervous breakdown after publishing his second novel, “Be More Chill,” at 23.

“I guess ‘nervous breakdown’ is the right term,” he told the Voice. “Yeah, that pretty much covers all the bases.”

The Voice said he fought depression and had trouble dealing with the pressure of fulfilling his contract. He also worried that people would lose interest in his writing as the novelty of his youth wore off.

But he continued to have a thriving career as he aged. Vizzini had a gift for writing young, deadpan characters. He was collaborating with “Harry Potter” director Chris Columbus on the “House of Secrets” series of young adult novels, the second of which is due in the spring.

“I’d never written a novel, and I needed to co-write it with an established author. I read a few samples, and I was really taken with the work of Ned Vizzini,” Columbus told USA Today. “I loved his books, loved his dialogue, and I loved the way he could write teenagers.”

Vizzini also wrote the 2012 novel “The Other Normals” and wrote for ABC’s “The Last Resort.”

He is survived by his wife and their son.