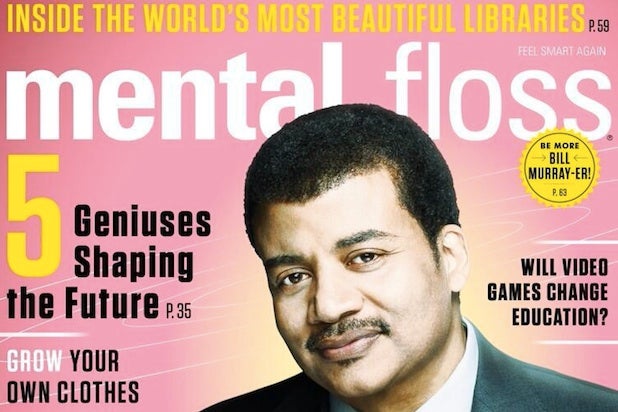 “Cosmos” host Neil deGrasse Tyson is the latest celebrity of color whose skin appears lightened on the cover of a magazine — and this time, he called the magazine out for it.

“Nothing like being overexposed,” the famed astrophysicist tweeted on Wednesday, referring to a particularly bright photo of him that appears on the March/April cover of Mental Floss.

While Tyson let Mental Floss off the hook in an email to TheWrap — he said a misapplication of the halo effect in the editing process was a “rookie mistake” that caused the lightened result — others are not so quick to forgive what many see as a “whitewashing” of black celebrities and other people of color in magazines.

Academy Award nominee Lupita Nyong’o was featured in a spread for Vanity Fair in January, and immediately the photos faced backlash for what some alleged was a deliberate lightening of her skin.

“Vanity Fair will likely make the argument that it was lighting and not lightening – that is to say that instead of ordering some photoshopper to lighten Nyong’o’s skin, they’ll pretend that the light in the room blew her out,” wrote Julia Sonenshein of female-centric blog The Gloss.

“In an industry where every single detail is manipulated to be perfect, it just isn’t possible that everyone fell down on the job and forgot that her skin tone was totally off. There’s just not a chance that this was an accident.”

Photoshopping magazine pictures is nothing new. Feminist blog Jezebel offered $10,000 for the unretouched photos of February Vogue cover star Lena Dunham, and by comparison, the hue and brightness of the final photos are drastically different than that of the originals.

But when it comes to cover models of color, sensitivities are understandably high.

Gabourey Sidibe landed one of four covers of Elle in 2010 for the magazine’s 25th anniversary issue. Beyond the fact that she was the only one whose body was cropped out of the photo, many, including Jezebel, called out the magazine for putting a noticeably lighter picture of Sidibe on the cover.

But Elle denied any prejudice or wrongdoing.

“We have four separate covers this month and Gabby’s cover was not retouched any more or less than the others,” the magazine told the Telegraph at the time.

“We had 25 cover-worthy subjects in our portfolio and we chose Gabby because of who she is,” it added. “We shot this as a story of exuberant young women changing the world. If you take a look at the portfolio, each of the women were shot in different ways and for different reasons.”

Elle was accused of the same racial “whitewashing” and body-hiding in January with its cover featuring comedienne Mindy Kaling, the only one of four “Women in TV” covers to be shot in black and white and cropped to a close up.

The Gloss’s Sonenshein weighed in on that controversy as well, writing that Kaling’s image was deliberately diluted to make it more “palatable” just a week before the Vanity Fair photos of Nyong’o were released.

Though Kaling said she thought the photo of her was beautiful, and Tyson dismissed the brightened image as “more a fun, factual reaction to the photo than an expressed concern for what they did,” observers remain hyper aware of magazines’ Photoshop tricks, especially in an awards season where black actors and actresses are being accoladed for their tremendous performances last year.

Writes Sonenshein, “To perpetuate an idea that the most flattering picture of a black actress is one where her blackness is altered is straight up racist, and if you don’t see that, then you’re frankly part of the problem.”

Nothing like being overexposed. No, literally, they could have dropped an f/stop or two on this photo pic.twitter.com/1dyFzfGPeN — Neil deGrasse Tyson (@neiltyson) February 12, 2014