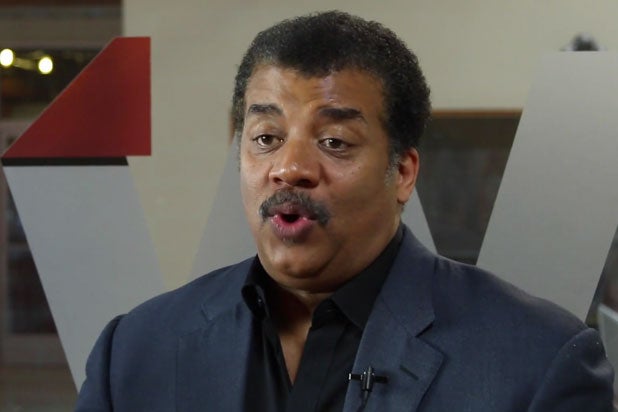 Hopefully Neil deGrasse Tyson’s lawyer is as well-versed in the law as Tyson is in science.

Celebrity scientist Tyson was sued for fraud and other counts on Thursday by a man who says he was systematically excluded from the production company behind Tyson’s “StarTalk” radio show, which he says he co-founded.

Worse, the lawsuit says, he was pushed out at a time when he was battling a rare kidney disease.

In his lawsuit, filed Thursday in federal court in New York, photographer David Gamble says that he and Helen Matsos, also named as a defendant, developed the idea for the show and pitched it to Tyson to host after approaching him in 2006.

The next year, the three formed Curved Light Productions, with each party kicking in $10,000 to produce “the first pilot series” of the show.

Eventually, the show received a grant, and was able to move forward, the suit says.

“Throughout this time, Gamble handled all aspects of production, including but not limited to the selection and hiring of talent, confirming bookings, ensuring all payments were made to the appropriate parties, dealing with accountants and legal counsel, and coordinating with the production studios to ensure the radio shows were produced in a timely manner and within budget,” the lawsuit reads.

However, in 2011, Gamble “was battling polycystic kidney disease, a rare genetic affliction that affects one in 1,000 Americans,” and entered final stage kidney failure in September of that year. At that time, the suit says, “Matsos and Tyson began systematically excluding Gamble from decision making at CLP. Rather than confer with Gamble on fundamental issues such as production work, creative direction, and the allocation of profits, Matsos and Tyson ceased communicating with Gamble. To make matters worse, upon information and belief, Tyson specifically instructed CLP’s accountant and bookkeeper – the very same individuals Gamble had hired – to cease all communications with Gamble.”

Eventually, the complaint alleges, Matsos and Tyson “approached Gamble and informed him that he was spending too much time on dialysis and that, as a result, he should cease receiving his customary production fee – Gamble’s sole source of income at the time – and instead, receive a monthly consultant fee of $1,000, for a term of one year only – subject to renewal only upon mutual consent of the parties. “

That wasn’t enough for Gamble to live on and pay his medical bills with, the suit says, so he agreed to sell his interest in the show for $350,000.

“It did not take long for CLP to default on its payment and reporting obligations to Gamble,” the suit reads. “At the time, however, Gamble’s health had deteriorated to such an extent that he was neither physically nor financially able to address CLP’s default. “

Gamble attempted to settle the dispute with an amended agreement, according to the suit, which he agreed to because “Tyson had informed him that Tyson would likely be leaving StarTalk and that he did not believe the show had any future. Tyson encouraged Gamble to agree to the revised terms, explaining that Gamble should just take the ‘money while it’s there’ because it was likely CLP may simply shut down and contingent payments would not be forthcoming.”

Months later, the suit alleges, he found out that Curved Light had signed a television deal with National Geographic for “StarTalk,” a deal that Tyson and Matsos didn’t inform Gamble of.

Defendant Tyson purposefully concealed from Gamble the fact that CLP had entered into a television deal with National Geographic in order to negotiate a lower payout to Plaintiff for his membership interest,” the lawsuit reads. “At the time Tyson represented to Gamble that the financial standing of ‘StarTalk’ was in jeopardy, Tyson knew that was not the case, and that CLP had negotiated a lucrative television deal with a major television network.”

Gamble also alleges that Tyson has used a portrait photo that Gamble took of him for purposes that Gamble never agreed to, and was never offered any compensation for.

TheWrap has reached out to Tyson for comment on the lawsuit.

Alleging copyright infringement, fraudulent concealment by a fiduciary, fraud and deceit,. breach of contract and other counts, the suit seeks unspecified damages.